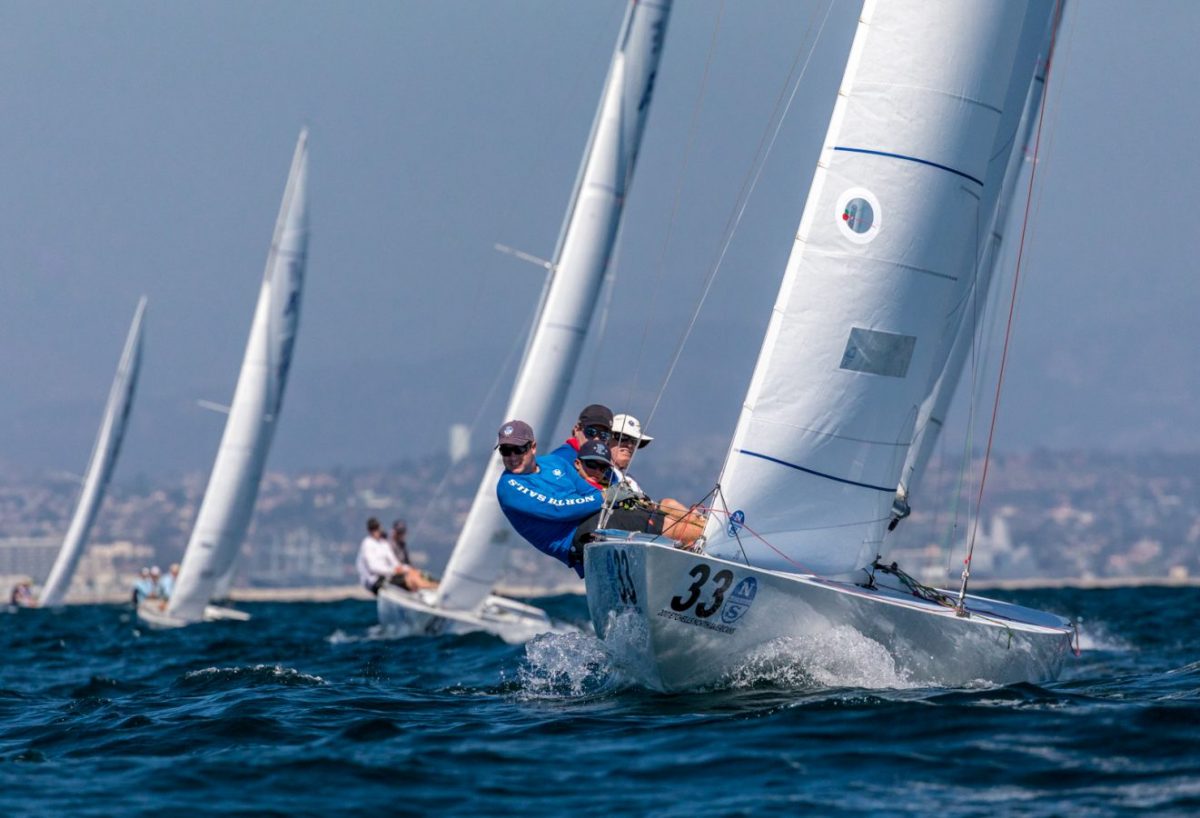 The impending 2018 Etchells World Championship at Brisbane tells a tale almost as old as time itself. The word we are wandering around is, epic. Come October 18, 2018, this most highly competitive class of one-design sailboats will hold their premier regatta on the waters of Moreton Bay in Brisbane. The event for the Etchells, now in their 50th year, will be staged out of the Royal Queensland Yacht Squadron, on the shores of Manly.

Inside the world of sailing, both the club, and the fact that around 85 entries have already been received, also fall into the classification of epic. As entries close on September 14, it is expected that around 90 boats, along with their super-keen crews from all around the globe, will be bustling on the start line. So well done to all of those who have made the commitment to be here.

Now leading the overall charge, as it were, the boats have already begun to arrive and fill the immense hardstand area at RQ, as the host club is best known. The competition will be hot, hot, hot on the water. Trying to determine who will reign supreme amongst this armada of former World Champions in this and other classes, America’s Cup stars, round the world ocean racers, as well as Olympic legends, is not something many would be prepared to tackle. One thing that is much easier to nominate and describe, is just how the local Brisbane Fleet will look after everyone in their world-renowned, convivial manner.

David Irvine, the Chairman of the Organising Committee, commented about the current state of play, “It’s wonderful to see the representation from all over the fleet, and also the globe. This is the true Etchells spirit of participation and camaraderie, which is now in its fifth decade!”

“We rolled on from Newport R.I. in 2014, when we were successful in our bid to host the regatta, and have not stopped since. It is a delight to see the result we have to date, and so now we move onto making the outcome for all who are attending exactly what they are coming for, and have come to expect from this team. My thanks to the crew that have made it possible, and also all the competitors for making the journey.”

On that note, it is so interesting to learn so much about the kinds of crews coming to Brisbane. When you also get to learn how crews came to be, and their motivations for attending, you get an insight into the joys of sailing.

Scott Kaufman is the Skipper of USA 1198, America Jane 11, which is one of the 20 or so four-up crews attending the regatta. Scott was actually born in Sydney, but the ex-pat has lived in the USA since 1974. He actually represented Australia in the 1968 Olympics in Mexico in the very pretty 5.5 metre Class.

Crewmen Jesse Kirkland sailed in the 2012 Olympics in the 49er class for Bermuda, and Lucas Calabrase sailed in the 2012 and 2016 Olympics for Argentina in the 470s, claiming a Bronze Medal at Weymouth (2012). These two used to sail against each other in the Optimist Class. The final crewman is Austen Anderson, who sailed for Hobart College in several classes.

“This will be our third World Championship together as a team. Unfortunately we broke our mast in 2016, and were in the Top 10 in 2017. We are also the current North American Champions. The boat itself is in great shape, and has been updated constantly.”

“As a four-man crew we do best in medium conditions, but higher breeze, like those in San Francisco, is not a problem, just more challenging. We will be sailing in the pre-Worlds, as well as the Worlds. Our boat went into the container last week for the 35-day trip to Brisbane. So yes. We are coming and really looking forward to it all.”

Marty Kaye is the skipper and co-owner of HKG 1428, Les Freak Sont Chic, with Marco Pocci, who is the bowman on board. They have recruited British Finn (Olympic Class) sailor, Ben “Guns” Cornish, to be the mainsheet hand in the middle. They are completing in their third World Championship in a row, with an Ontario boat (Canada) built for the 2016 Cowes World Championship, and use North Sails to power her along.

“Part of our program is to race against the best there is, in a quality fleet. We placed 22nd in the Worlds at Cowes, then won the British Nationals, and were subsequently top five in European regattas out of Cowes, including the prestigious Sir Kenneth Preston Trophy. We placed 10th in San Francisco (2017 Worlds), with the highlight being winning the last race. So we are improving, and hope to continue to do so.”

“We are racing in European Championship from August 24-27, which will be a last key regatta before the pre-worlds and then World Championship in Brisbane. It is an interesting track out the front of RQ, and a great club to sail from. We are hoping for warm conditions, and with 80+ boat fleet there will be some serious competition, that then gets coupled with the Aussie hospitality. Overall, we are pretty excited!”

“We’re are aiming to line up before the pre-Worlds with our US training partner, Steve ‘Benji’ Benjamin, the reigning World Champion, to fine tune our speed. I think we still need a better understanding of the Brisbane track, but hopefully during the pre-worlds we can get comfortable with the tides and wind.”

So what all of the above means is that it won’t be easy out on the water. Far from it, actually. Conversely, everything off the water, from logistics to entertainment, has been made super easy. Now to find out all you need to know, or to make your booking before it all gets closed off, simply go to https://etchellsbrisbane.com and click away!