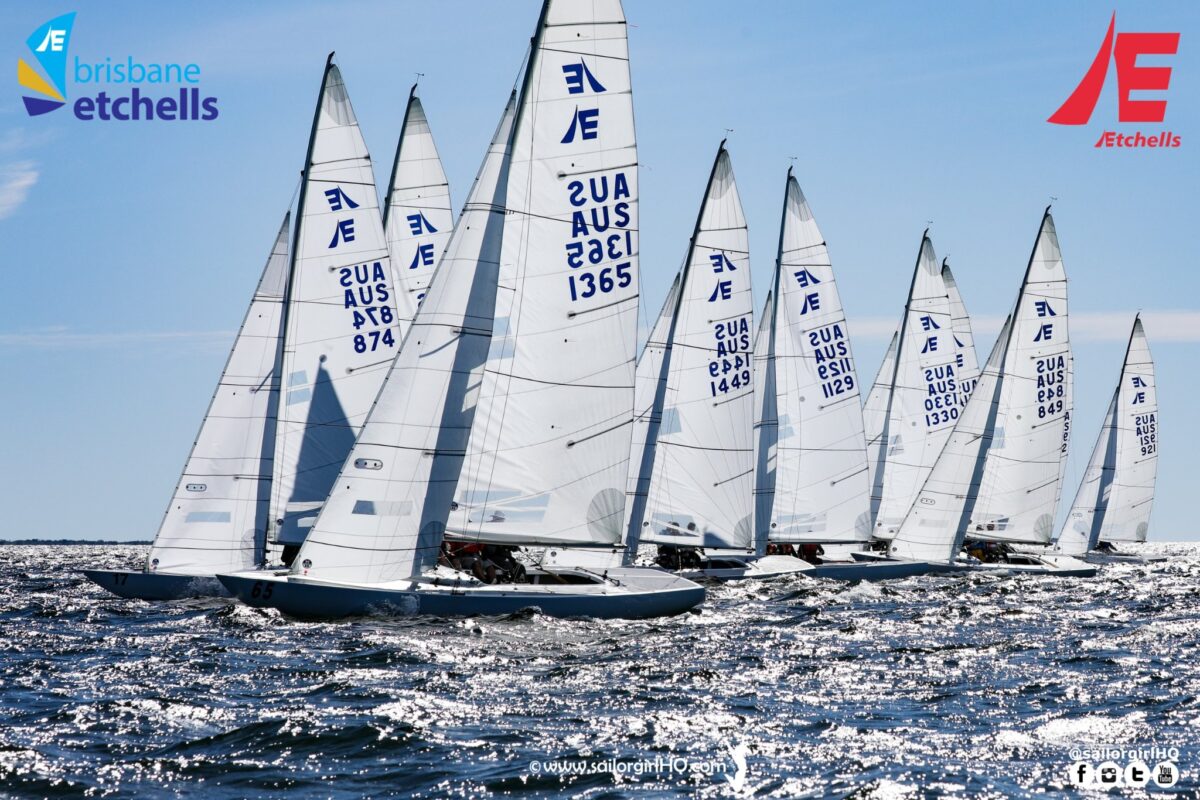 Last weekend saw RQYS host the inaugural Waterloo Cup for Etchells. This regatta was put together at the last minute after the Mooloolaba Winter Nationals were cancelled due to an unsafe bar (river – not drinking establishment 😊) and to provide an additional regatta for the southerners that came up for the Southport Regatta (that doubled as the Winter Nationals) several weeks earlier. Many thanks go to the club and Brisbane Fleet committee for arranging this regatta at short notice.

We had a fleet of 14 entered, only for our fleet captain Jason Hawkins to withdraw on the first morning due to an injury to a crew member. We had 7 Etchells make the trip from down south with Wayne Kirby from the Southport joining 6 of the local fleet.

Though only small in numbers there was some quality with 3 Etchells world champions represented including Martin Hill and his crew of local Olympic gold medallist Mat Belcher and Julian Plant who won the Worlds held here in Brisbane in 2018.

Saturday saw 3 races completed in 10-15 kt westerlies on a course east of Green Island. Considering the reputation of westerlies the conditions were fairly stable and provided some good and close racing. Race 1 went to Lisa Rose, our own Todd Anderson on TAG grabbed the second and Cameron Miles on Tango won race 3.

Martin Hill on Lisa Rose was the overnight leader with a 1 point lead over TAG. A point further back was Tango. Also in the mix was Peter McNeill on Lucy.

The un-Queensland like temperatures with a wind chill in the low teens made for a very long and cold beat home at the end of the day. A hot shower and a great BBQ put on by our resident fleet chef Chris Nezmah soon warmed everyone up.

Sunday dawned overcast with a freezing 15 kt westerly blowing through the RQ grounds. The wind chill prompting comments along the lines of “if I wanted to sail in these temperatures I’d live in Hobart!”

With the race committee not receptive to a minimum sailing temperature we all set off for an 11am start. I can assure you it was no warmer on the race course with most sailors wearing their entire kit including beanies in an effort to keep warm.

In Race 4TAG got their 2nd race win of the series with Lucy and Lisa Rose grabbing 2nd and 3rd. Tango was subsequently DSQed after an incident with Lisa Rose

Race 5 saw the breeze drop to about 10 kts and the sun come out. This made conditions a lot more palatable, which was just as well, as it would have been a tough ask to stay out for 3 races in the earlier temperatures and wind strength. Lisa Rose grabbed this win with Tango second and TAG 3rd. The regatta’s was anyone’s at this stage.

Going into the final race Lisa Rose and TAG were tied on equal points after 1 drop. Lucy was 4 points further back and Tango was right in the mix as well. It was all on.

Noel Paterson on Waterloo Too led the fleet for the first lap with TAG close on his heels with Lisa Rose and Lucy in hard pursuit. Todd got Patto through at the bottom to clear out for a comfortable win with Lisa Rose grabbing third. A protest against Lucy by Martin saw them DSQed for this race.

Once the protests were all settled TAG came away the winner by 2 points form Lisa Rose with Lucy grabbing the final podium spot. Congratulations to Todd Anderson, Curtis Skinner and Lucas Down on a great result.

The day rounded out with Chris’s famous BBQ chicken wings and prizegiving at the Etchells Hardstand.

We would like to thank Guy and the other race committee and mark boat volunteers who without their support the regatta would not have been possible.