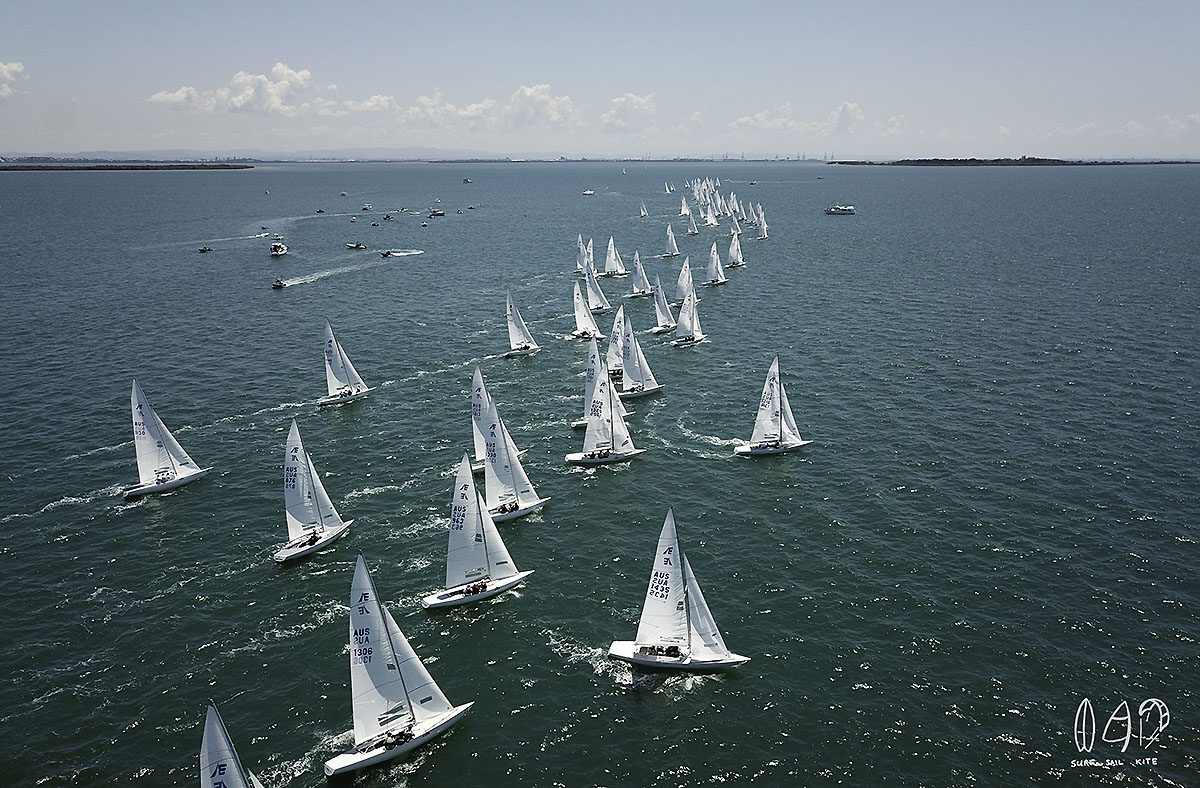 There was more breeze this morning than there was this afternoon on Moreton Bay in Brisbane. This was great news, for it meant that after just a short stay ashore, the 2018 Etchells World Championship Race Committee sent the 94 boat fleet out for racing, and it looked like there was more than a great chance of getting two races in. Opting for the shorter Course Two, which is two complete windward returns, also set it up beautifully.

Yet for my money, having them radio everyone to indicate most strongly that this was a Code Flag U start, meaning there were no prisoners to be taken, really did signal their intentions. For Race two, and after a General Recall, the dreaded Black Flag appeared. Unfortunately, both races claimed victims, and so the bar saw some sailors much earlier than anticipated. Some have scoreboard pressure to show for it, now that we have four races completed in the series. 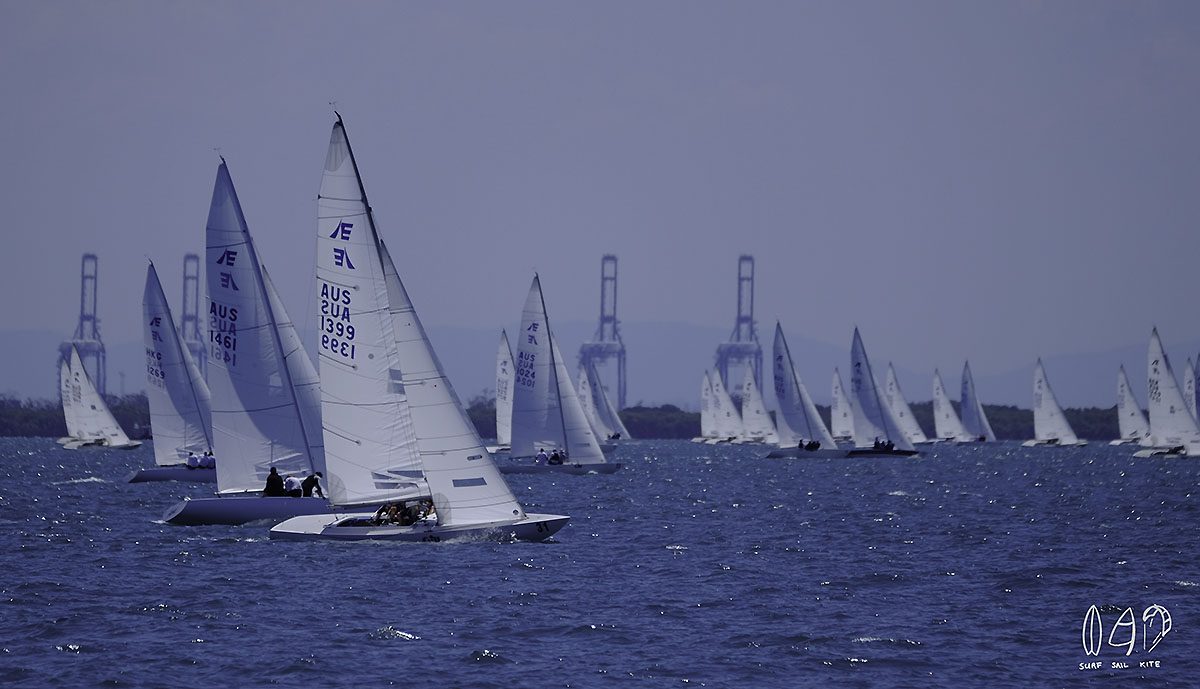 The first race was set on an axis of 020 degrees over a range of 2.4nm, and it was blowing a full ten knots. There was even a chance of an afternoon thunderstorm, which did actually roll through the Gold Coast to the South, but on the track it was hot and hard work. As per the last few days there was a tide running from South the North.

Unlike yesterday, starting left was favoured, but you did want to cross back early, and not end up near the islands, for this put you well out of the game. Those that did as mentioned above, slaughtered those coming out from the right. There was much less breeze at the weather mark, as the clouds over the land reached up to the heavens. Good for building storms, not so flash for sailing, perhaps. 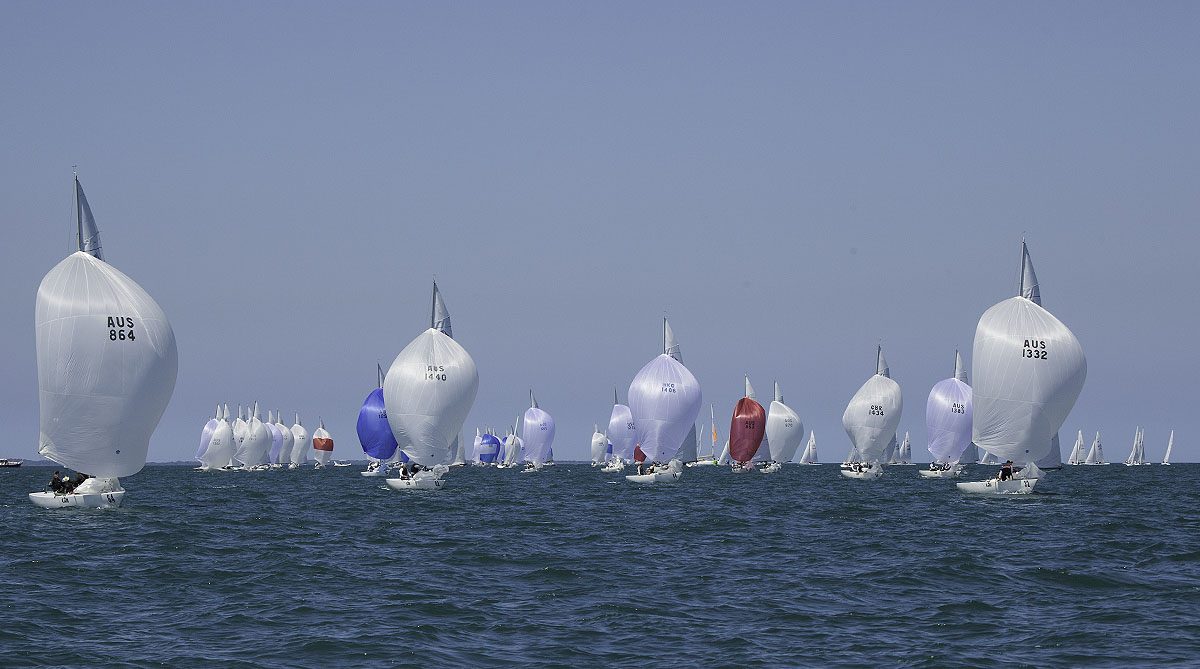 For the second race, which the Race Committee got away pretty smartly after the last boat was home from the first, the breeze had clocked right to maybe 030 degrees and was 10 knots when it wanted to be. During the set up, 045 looked more like the go, and this was settled on as they got away just on three PM in the afternoon. Course Two was selected, so the boats would be back closer to the Royal Queensland Yacht Squadron for the trip home. A range of 2.3nm was selected. Some got to watch it unfold of course, as they headed home after having been pinged on the Black Flag.

So it is also about now that consistency pays off. Big time. Many an Etchells regatta has been won without the winning crew having a bullet (first place) recorded against their name. Such would be the case today, with Mark Thornburrow, Mike Huang, Alexander Conway, and Will Ryan on HKG 1406 leapfrogging over Lisa Rose who held the top spot last night. A fourth and fifth place today give them a five-point spread over AUS 1449. So well done Racer C!

In third place overall, and some seven points further adrift is GenXY – Matthew Chew, Brian Donovan, Ben Vercoe, Ashley Deeks. At one point GenXY seemed to have secured Race Three, but some clever gybing by Top 40 on the last run home (AUS 1332 – Billy Merrington, Ian McKillop and Michael Coxon), saw them grab the first win of the day. They backed it up with a second in Race Four, and so sit in sixth place overall, this evening. “It was an unbelievable start to the day. Ian and Michael did really well. We had good speed, got out to the left, and then they found some shifts for us, and before we knew it we were in the top three at the weather mark. The boat was flowing well, and our communication was also right on.” 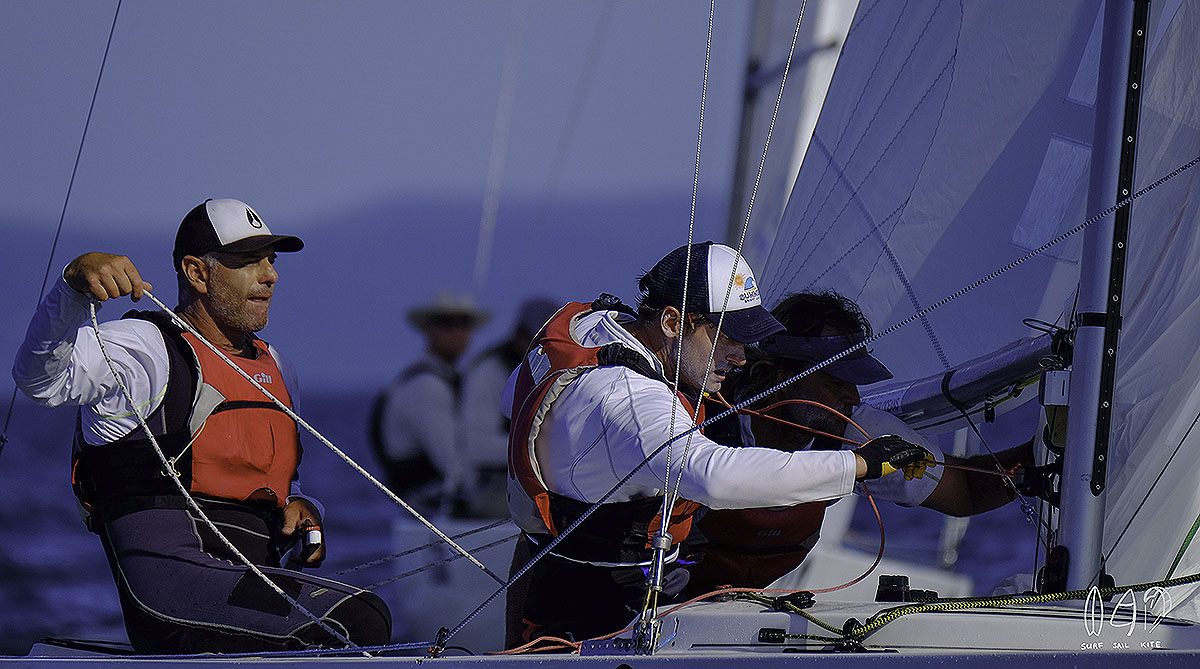 As for that passing manoeuvre, Merrington just said, “Ian had done a superb job with the spinnaker trim, and e knew we could beat him to the gybe, which meant we could hold him off. A second in Race Four was almost a carbon copy. “Yes, we were trying to repeat it all. It pretty much worked and we were just below the mid-line boat at the start. The pin was favoured, but we figured you were a one in four chance to get it right, so we went for something a touch more conservative.”

Jeanne-Claude Strong commented later about a race win at a World Championship, “It is pretty awesome. We are super-happy. It was a great effort by everybody. Seve (Jarvin) got us a great start and Marcus (Burke) did a wonderful job trimming, and also calling the downwind tactics. Jeni (Danks) is a very capable and competitive sailor and works the foredeck during and after the kite hoist magnificently.” 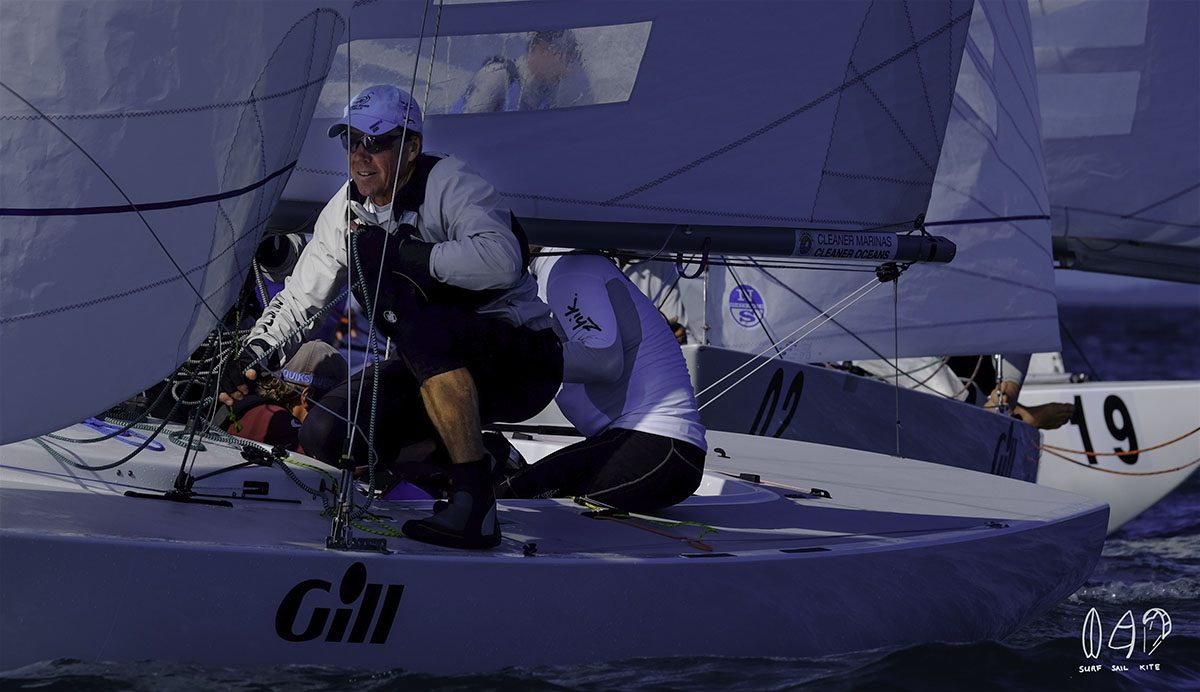 On the day overall, which saw them climb into 15th spot overall, Strong said, “We were a bit disappointed with the result from the first race, despite a good start. We just did not have the wind with us and ended up pretty deep.” In relation to some of her training partners not having such a good day, Strong referred to the great Mick Doohan, who always said to her that, ‘If you’re not falling off every now and then, you’re just not trying!”

She then added, “At least one of our band of three crews has had a good day on each of the three race days so far. I am so very fortunate to train with these guys (Havoc and Magpie).” 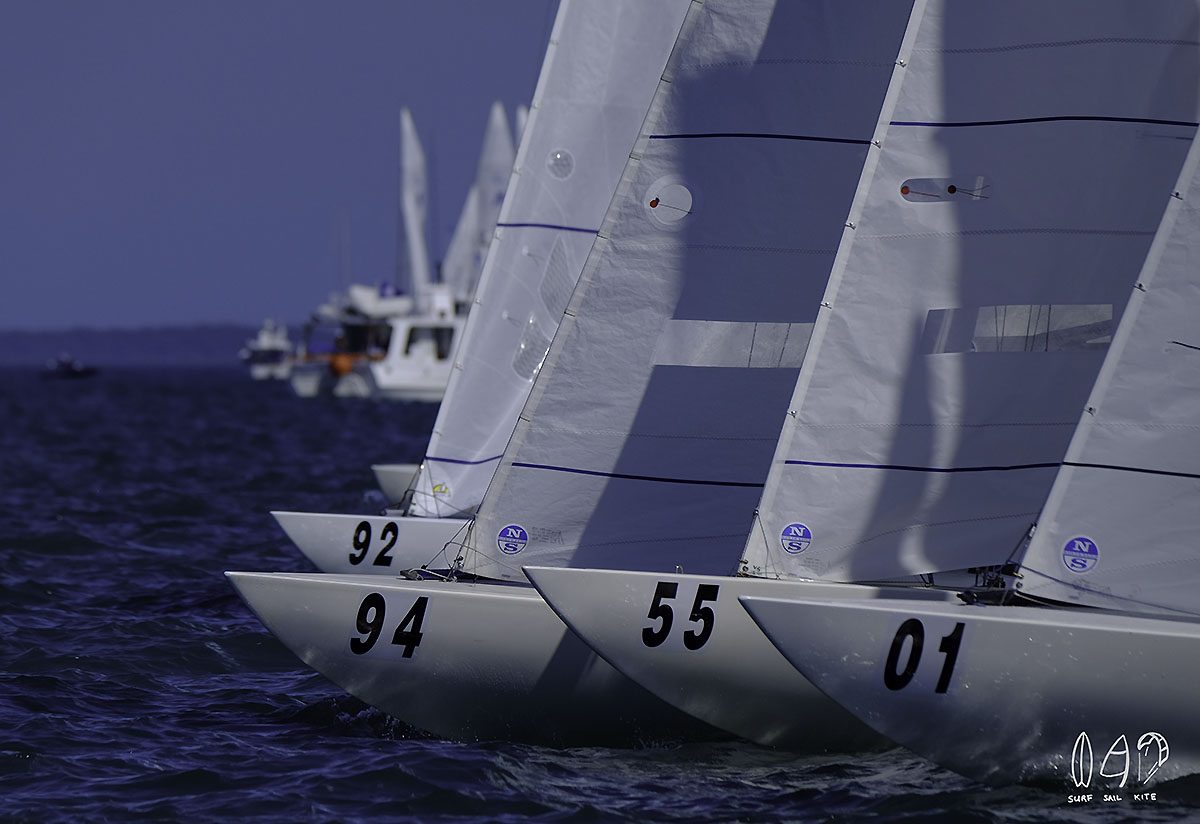 Rod Hagebols is looking after the two entries from the Royal Geelong Yacht Club, which is Perfect Balance AUS 1387 (Brendan Garner, Chris Manton, Ben O’Brien, and Joshua Garner), and also Voodoo Spirit, AUS 1024, which is crewed by Guyon Wilson, Alistair Lee, and Ben Ramage. 49 of the 94 entries (over 52.13%) comprise Corinthian crews, which means there are no paid hands on board. Voodoo Spirit is one of them. Hagebols commented quayside, “They are a couple of teams who have not been on the world circuit or anything. They are a couple of local crews from the Geelong Fleet, and they really wanted to come up and give the Worlds a go.”

“It has been great and the biggest thing, which applies to all the Etchells, has been the sharing of information. The skill is there, so it really has come down to getting used to the big fleet. So it is about trying to manage that, and also the tide flows. We have been paying a lot of respect to the latter, so are really happy not have been pinged, so far. There is plenty of space on the line, so it is about finding your lane and we really are having a good time.” 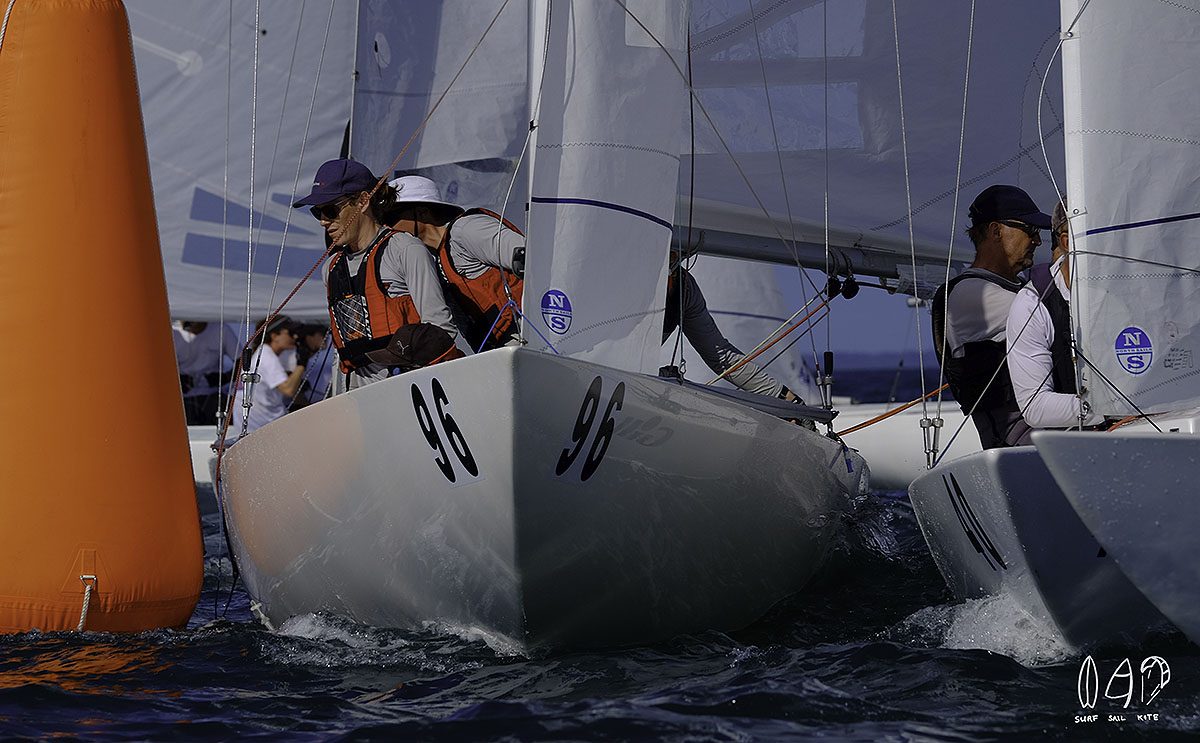 David Turton is racing Our Thing (AUS 1446) with Josh Torpy, and Klaus Lorenz. He is also involved in the Seabin project with Pete Ceglinski, one of which is at RQ, actually. “It is an interesting course with a lot of challenges, no matter where you place yourself. There are some tricks, and neither side seems to be playing fair. The Western side seemed to be best today, and I am not sure we ever got there. It was certainly a better effort today than yesterday, and that’s got us in the mid-30s overall (given they had a UFD yesterday).” 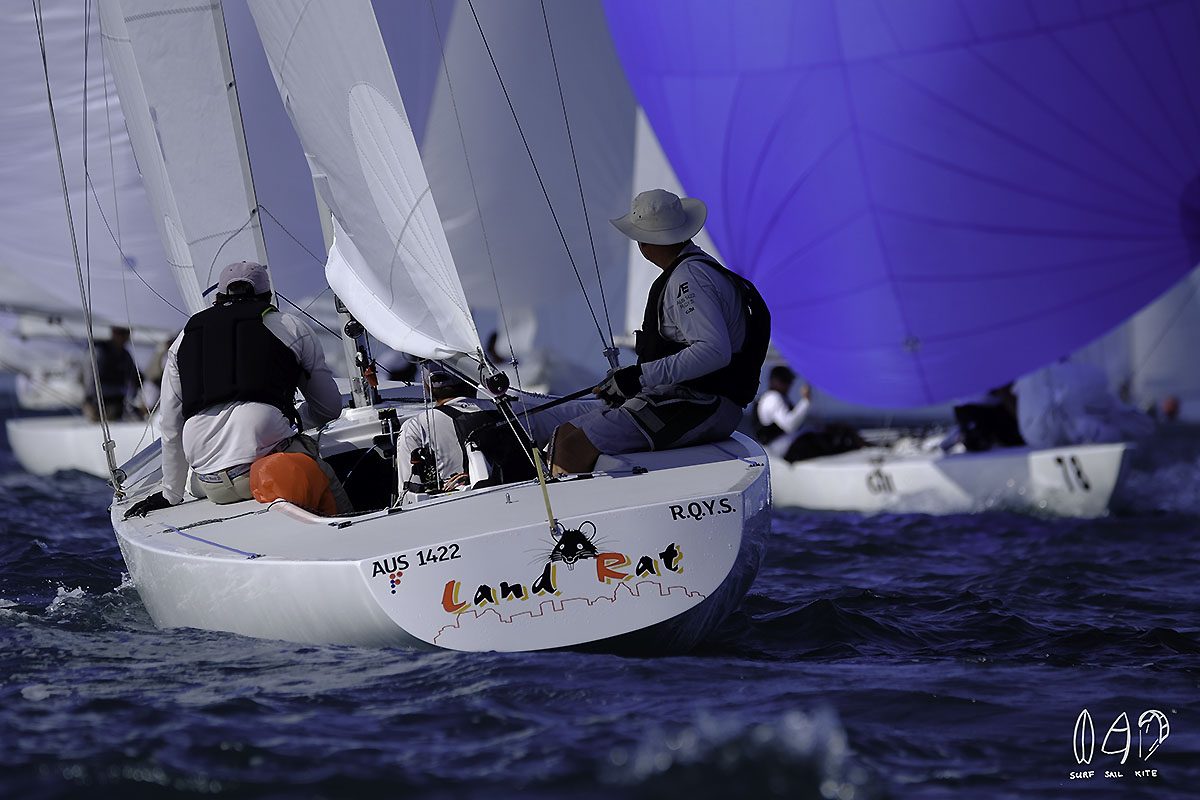 What is the start line like? “It is pretty exciting actually, especially with that tide. Finding a clean patch is key. You don’t get a lot of time to look around and take it in, and the crew would be on to me if I did. They know pretty quickly if I have lifted my head. Focus is paramount and you only get to take a look when you’re on the tow back in.”

Racing continues tomorrow, Thursday October 25, and is followed up immediately afterwards with the world famous David and Sue Healey BBQ. 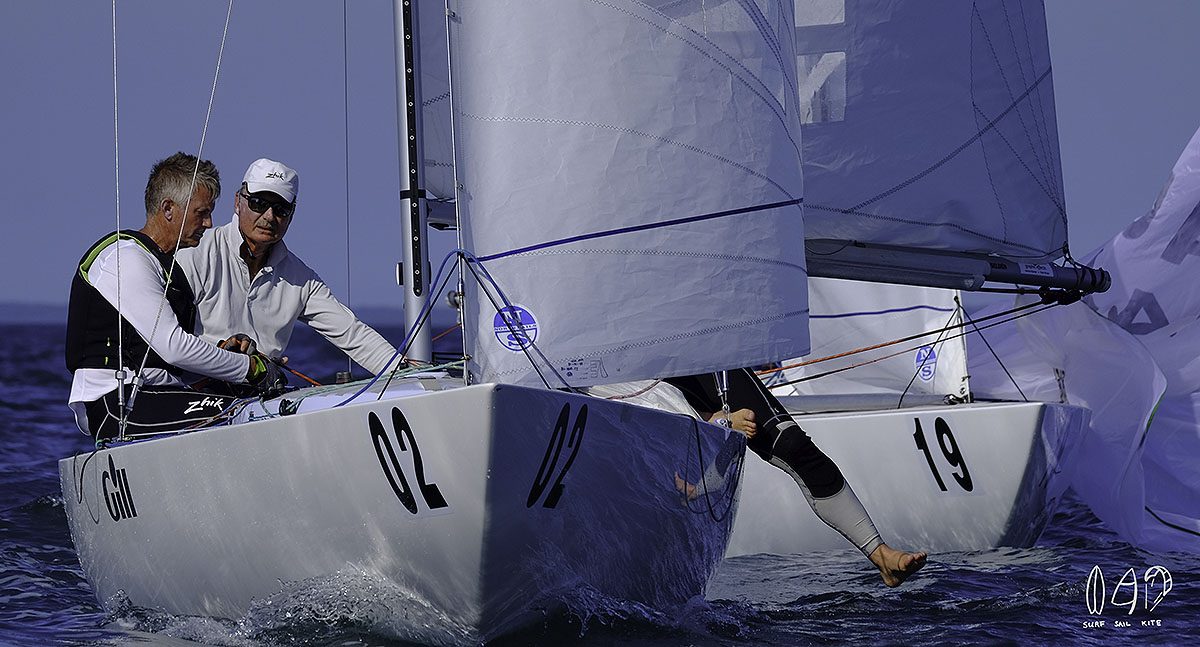 Now to find out all you need to know about the boats, on the water, off the water, or to register to receive news, simply go to https://etchellsbrisbane.com and click away!

The Royal Queensland Yacht Squadron in the Brisbane suburb of Manly will host the 94-boat strong armada for the 2018 Etchells World Championship, as they tussle it out to see which crew reigns supreme. Racing begins in earnest on Sunday October 21, and concludes on Saturday October 27.