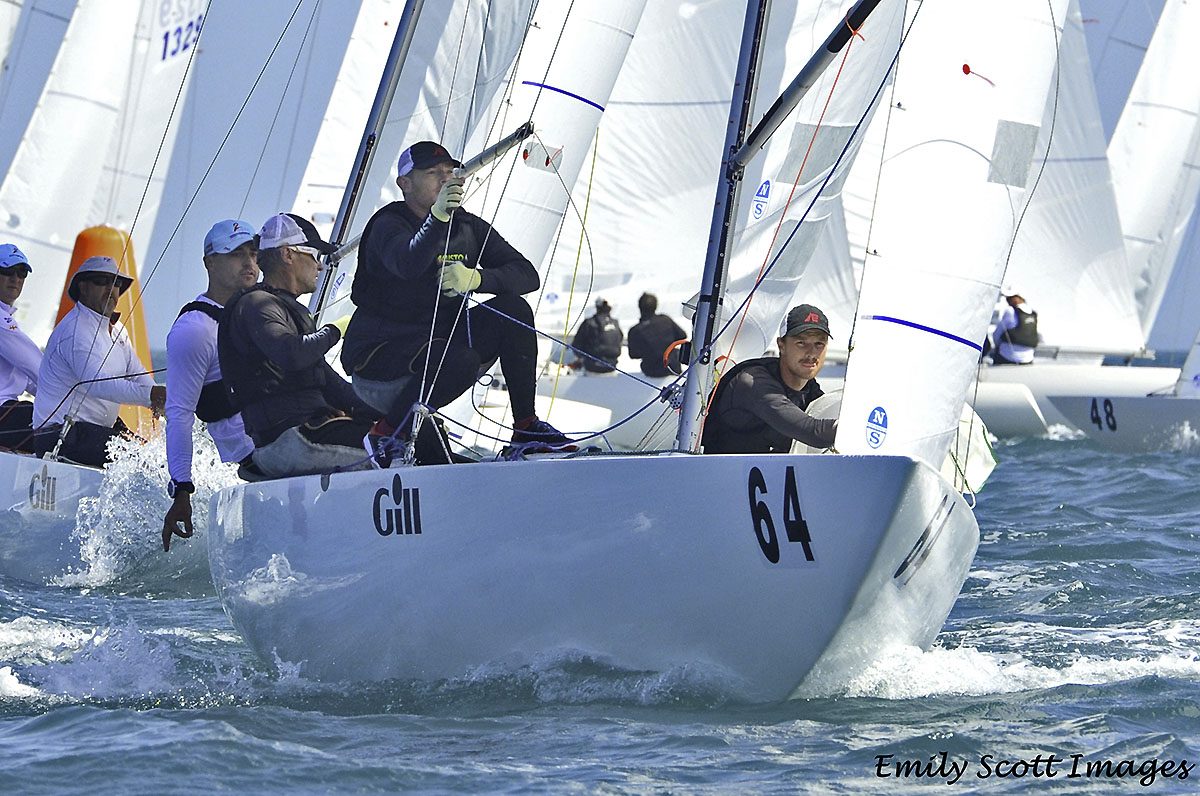 Looking at it, and knowing this is about sailing, you might expect that headline to be some reference to huge wind shifts. It is not. Mind you, out on the track today for the 2018 Etchells World Championship, we did see everything from 110 early on, to 050/060 degrees, with the latter being where it would settle in and allow two more races to be conducted. This brings the tally to six so far, which is a series, so well done to the entire Race Management team under the peerless Wilson Brothers.

One more race and the drop comes into play, which will make many of the crews happy, especially those already pinged under Code Flag U over the last couple of days or the dreaded Black that made its first appearance yesterday. So you would think that everybody would be playing nicely today, but alas there was more punishment to be handed out, with half a dozen receiving a soft rap over the knuckles and having an early lunch break as they watched, not partook, in race five. When Race Six finally got underway, with the Black Flag out once more, just the one crew had an early visit to the bar at the Royal Queensland Yacht Squadron mandated upon them. Doh.

So back to the headline, and this type of sailing is a sport where the lowest points matter, not the highest. Now this is where the line, three, not 300 really counts. Technically, there are still three races to be run. Two tomorrow, and then one more on Saturday. You win those three, and you collect three points. Get taken off the course, or sail well deep into the field, and you march towards 300 pretty smartly (and slide down the ladder even faster).

Friday’s weather is also set to play its part, too. It is going to be hot. 35˚C warm, actually, and there is 15 knots on offer, with 25-30 later in the day, and the chance of a thunderstorm too. Indeed one of those rolled through just as the world famous David and Sue Healey BBQ was underway. It did not have a lot of venom in it, but the light show was pretty cool. 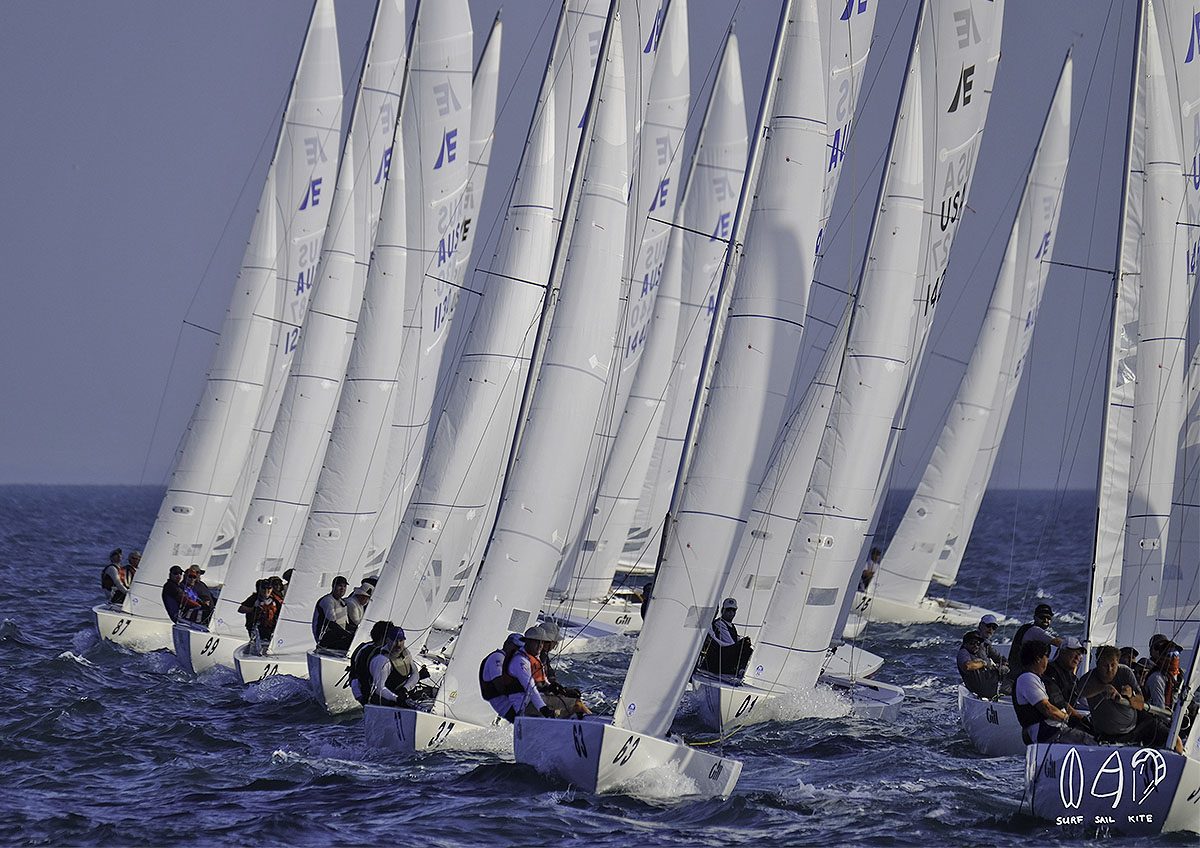 Matt Chew won the 2009 Etchells World Championship that was staged out of the Royal Brighton Yacht Club in Victoria. He was part of Jason Muir’s crew then. These days he skippers Gen XY, with Brian Donovan, Ash Deeks, and Ben Vercoe as crew, and today they won Race Five. They then backed it up with third place in Race Six to stand seven points clear on the overall tally from Racer C out of Hong Kong (Mark Thornburrow, Mike Huang, Alexander Conway, and 470 superstar, Will Ryan – some 13 points ahead of his 470 skipper, Mat Belcher on Lisa Rose).

A further 27 points aster is third place, USA 1464, Skanky Gene, which is Jay Cross, Mike Buckly, George Peet, and Eric Shampain. That might sound like a lot, but remember the drop has not yet come into play, nor has the rest of the racing unfolded, as yet. And so back to Chew, who came up with the three or three hundred line. He also said, “It is my first bullet (race win) in a World Championship, as the best we did in Melbourne was a fourth place. We are not really thinking about what might eventuate just yet. There is still the matter of those potential 300 points to keep us very focussed, and we were just all talking about that on the way back in. Maybe tomorrow night we might just dare to imagine.” 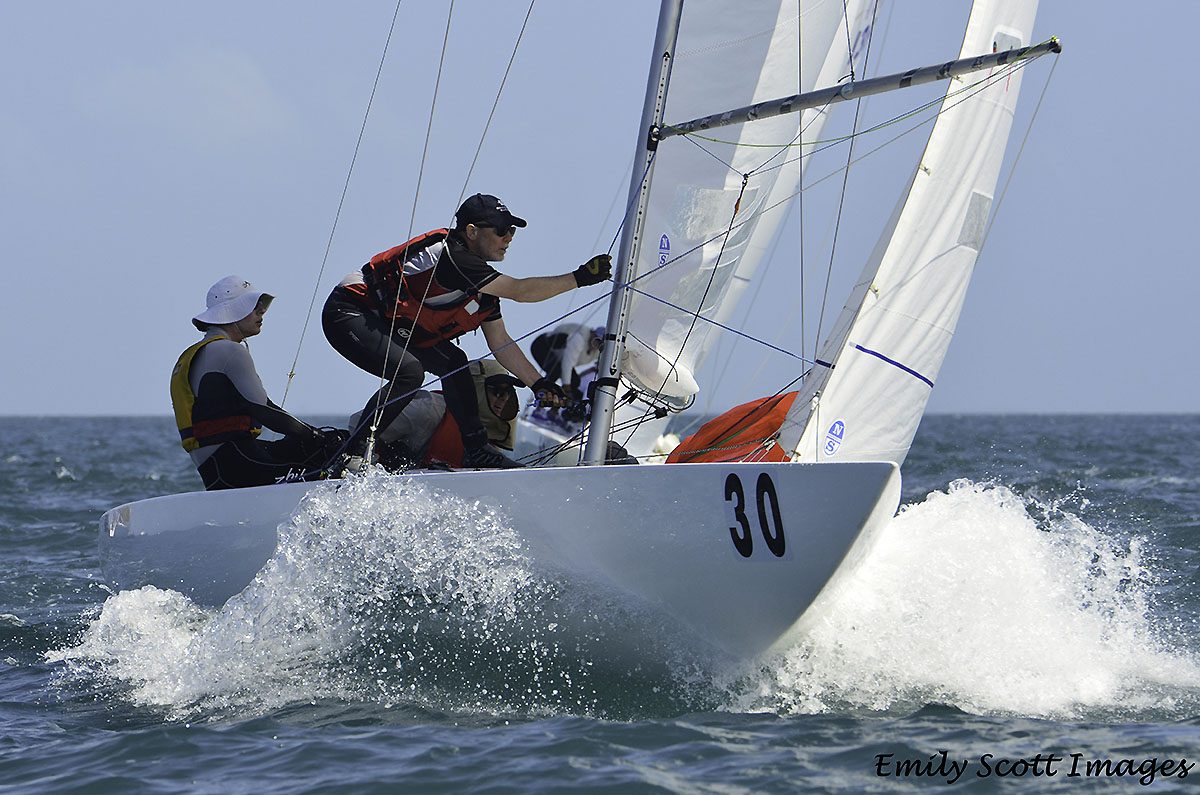 “We had a good day out there, and our worst result so far is a 17th, which is not too bad and a keeper normally, so we’ll see how that insurance pans out tomorrow. Hopefully we only score three more points, which will make the calculations a bit easier for us. It is really hard out there, so you have to get everything going correctly. You just have to try and avoid being in gas (disturbed air from other boats), which can dent your prospects pretty quickly.”

“It is unbelievable on the downwind leg when you see some of the mega-sailors still coming upwind, and a big reminder that it can easily be you. It is our home club and we know the water pretty well, so we’ll see what happens. Three’s the dream…” 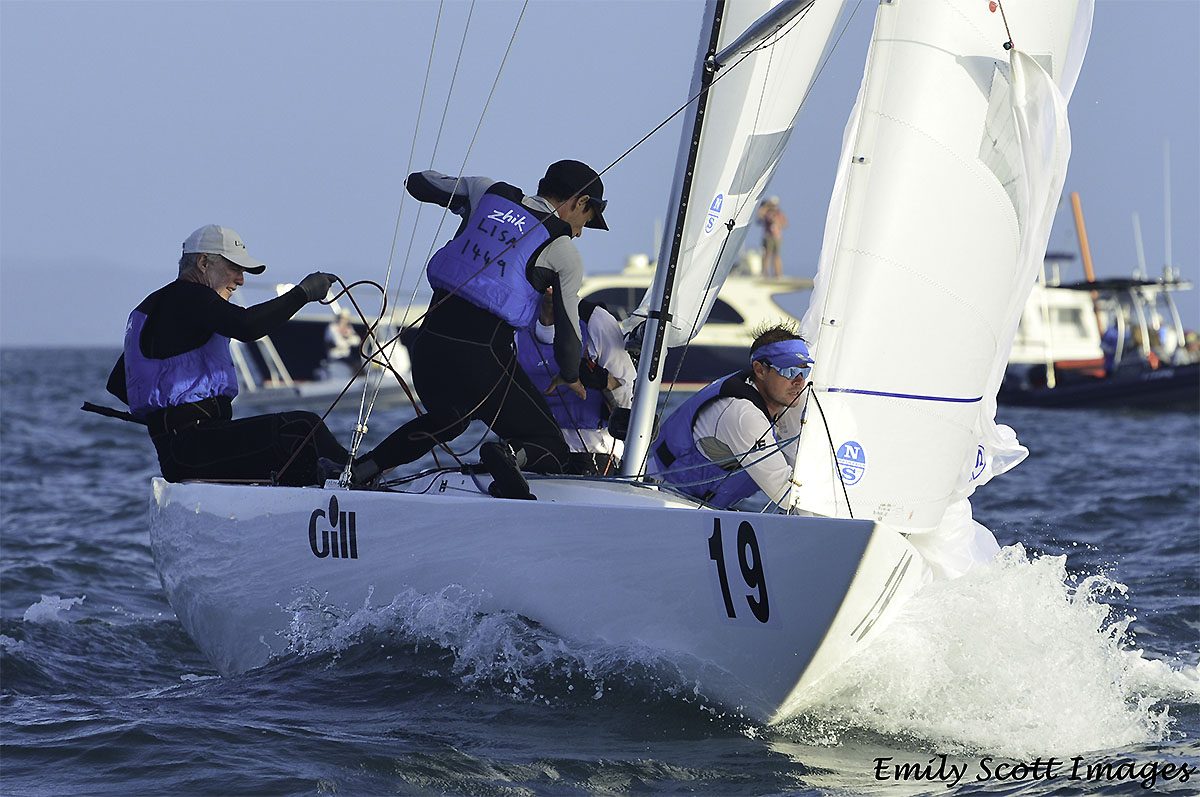 Mark Thornburrow has been coming here and Mooloolaba to attend the Australasian Championship for quite some time with his old boat Racer X, and now Racer C. He commented quayside, “We’re relying on Will’s knowledge a lot, as he grew up here, and trained a lot out on Moreton Bay. He knows his way around better than any of us, and he’s calling all the shots.”

There worst result so far is an 18th place (R% today), with the remainder all inside the top ten, including a fifth place in Race Six today. That’s more than a handy scorecard. “We’re feeling pretty good and reasonably confident, and we’re happy with the situation, overall. It will be nice if the extra wind does arrive tomorrow, and it will be good to get another two races completed. We are certainly going to be trying to make them all count. It will also be good to finish earlier, so maybe the Black Flag will appear sooner tomorrow.” 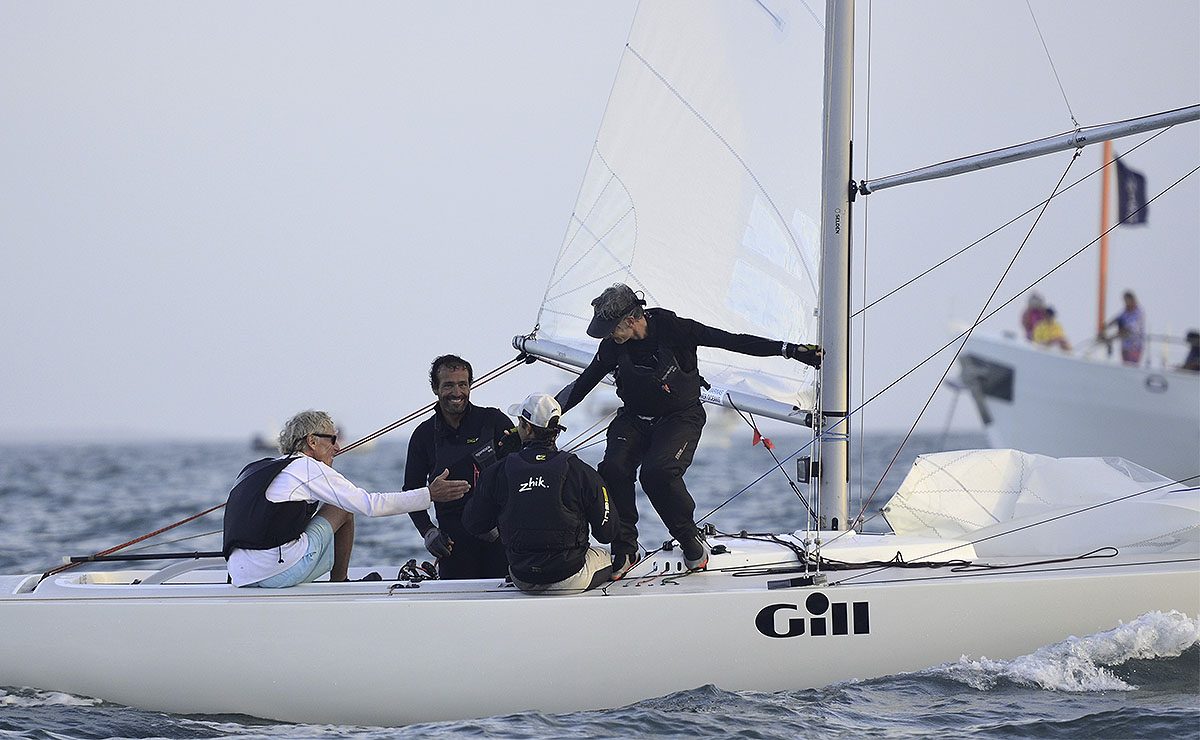 Today Alfie had an extra clip on when running with breeze, to which the legendary Smith said, “We’ve been going pretty well downwind for most of the week. Today seemed to suit our sailing, I think. Just getting the waves right, in terms of angle and we also seemed to be in the best pressure. Being fast downwind is a good thing to have in your armoury.”

In talking about the anticipated stronger breezes for Friday, Smith just said, “We prefer it to be like today. We’re OK in the heavier stuff, it is just that there are people faster than us in those conditions. We did a lot of training in the UK this year, and unusually there were very light or non-existent winds all season. The long, hot Summer meant we had three weekends of no sailing.” 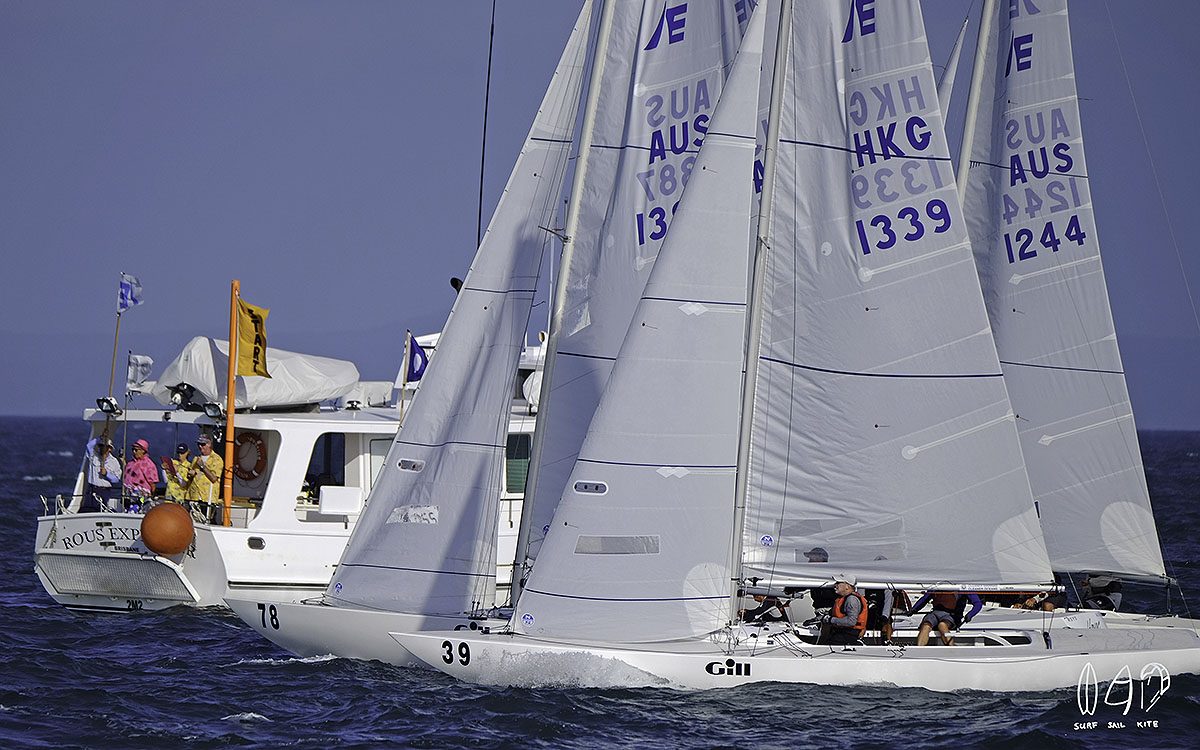 “We thought when we came here it was going to be big breezes, but it has not been as much as a lot of people probably thought. One day in the pre-worlds was certainly too much. Certainly getting to know the tides has been a big part of it all. I think we may really only be getting to grips with it now. If we could have done a few more regattas here, then it would have helped. Of course, having to do penalty turns is never going to help either, and we did have to do that on one of the earlier days. All in all, it is nice to win a race. Get a bad start and it is hard to get in the top 20, let alone the top 10, so we’ll just have to see. It is a very tough fleet and there are no slow boats. You just have to stay right on it.”, said Smith in closing. 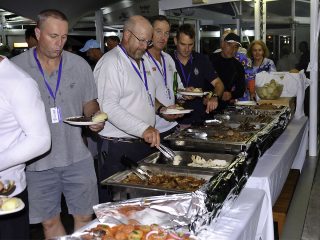 Racing continues tomorrow, Friday October 26, where it is hoped that two additional races will be completed. In the process, not only will the overall result become clearer, but also that for the other divisions, namely Masters, Grand Masters, Female Helm, Youth and Corinthian, with the latter all having amateur status.

The Royal Queensland Yacht Squadron in the Brisbane suburb of Manly will host the 94-boat strong armada for the 2018 Etchells World Championship, as they tussle it out to see which crew reigns supreme. Racing begins in earnest on Sunday October 21, and concludes on Saturday October 27. Now to find out all you need to know about the boats, on the water, off the water, or to register to receive news, simply go to https://etchellsbrisbane.com and click away!

nextEtchells Worlds Day 5 – When two is just one.