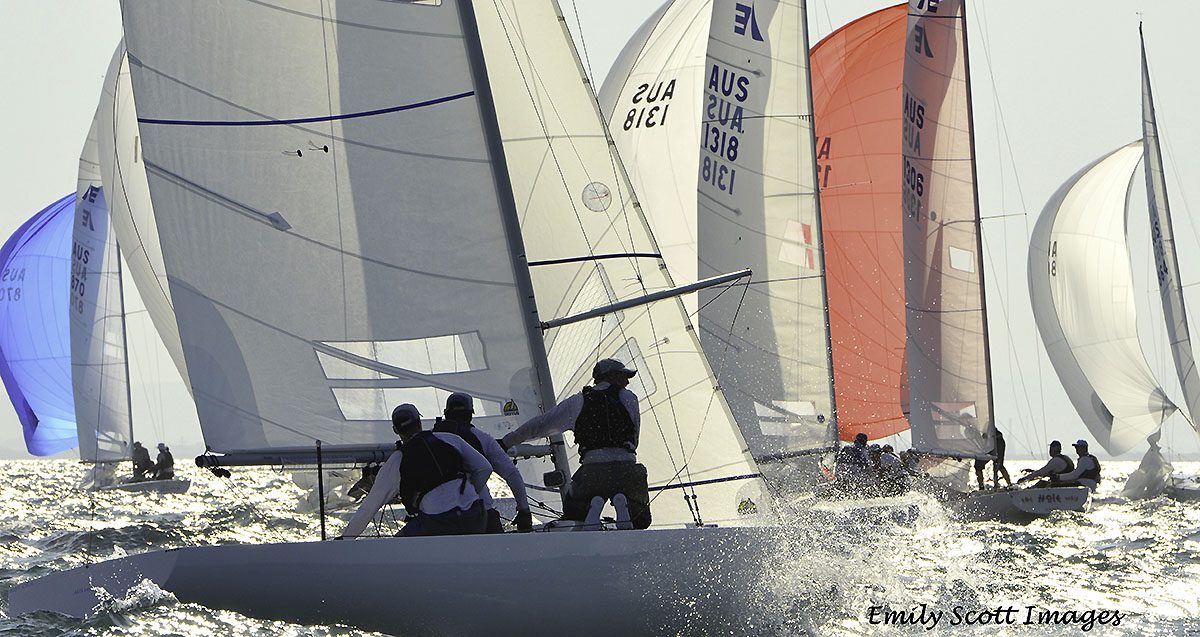 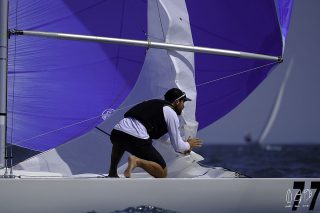 It is always nice to be on station, on time, and with the prospect of racing getting underway near enough to the schedule. Tick. Tick. Even Huey, the God of Wind had delivered a wonderful Northerly in the ten-knot zone for 2018 Etchells World Championship to enjoy. There’s always a catch, and this time it was the tide was just about to begin to ebb. It had been a full moon overnight, and a massive tide to boot, with the walkways to the floating marina just about going uphill as you walked to the boats.

Out on Moreton Bay, this was most evidenced by the fact the anchored vessels all swung through 90 degrees to be effectively beam on to the wind. 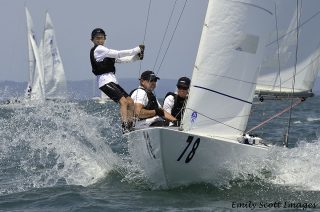 Thankfully, I can report that nearly all of the international visitors have now worked out the tides, which in today’s case would be South to North. Cool. As a result, there were many more USA and GBR sail numbers present in the upper echelons of the mark roundings. Nice.

Race seven would be on an axis of 355 degrees, out to a range of 2.4nm, with the leeward gate some 0.7 of a nautical mile up range of the start for the two windward/returns. This has been pretty much the status quo for the week, and it has worked well. Making every post a winner was, The Cure (AUS 1374), which is skippered by Class Governor, David Clark, and crewed by Alan Smith and Ray Smith (no relation), as well as young Angus Sherring for this regatta.

The Cure won the Queensland State Championship nigh on 12 moths ago, then backed that up with the 2018 Australasian Championship and then the Spring Regatta held here also at the Royal Queensland Yacht Squadron. So on the back of all of that, you could appreciate that the crew would be very excited by a bullet (race win) at a World Championship. 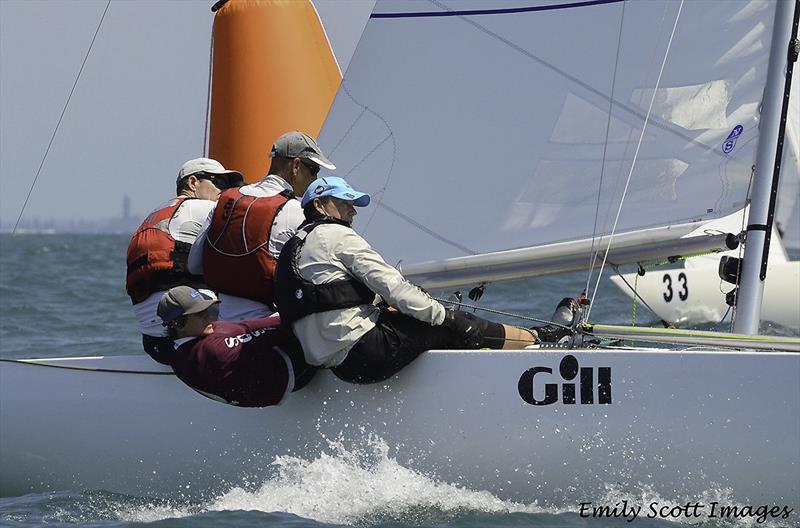 Yet there is more to that story, for now that they have done four Worlds, they have collected a bullet in each of them – Perth, Melbourne, Sydney and now Brisbane. Clark spoke jovially afterwards, “Yes. We just need to get the rest of the scorecard sorted out and we can be on the podium one day!”

The excitement was very discernable, and justifiable so, given how much the entire crew has put in to making this happen. “We woke up this morning and said the regatta starts today, as we have been a bit disappointed in the results so far. Coming out on to the water with a fresh mind certainly helped. A good start was essential, and then had speed, which allowed us to lead from gun to gun. (BTW bring back the gun I say…) 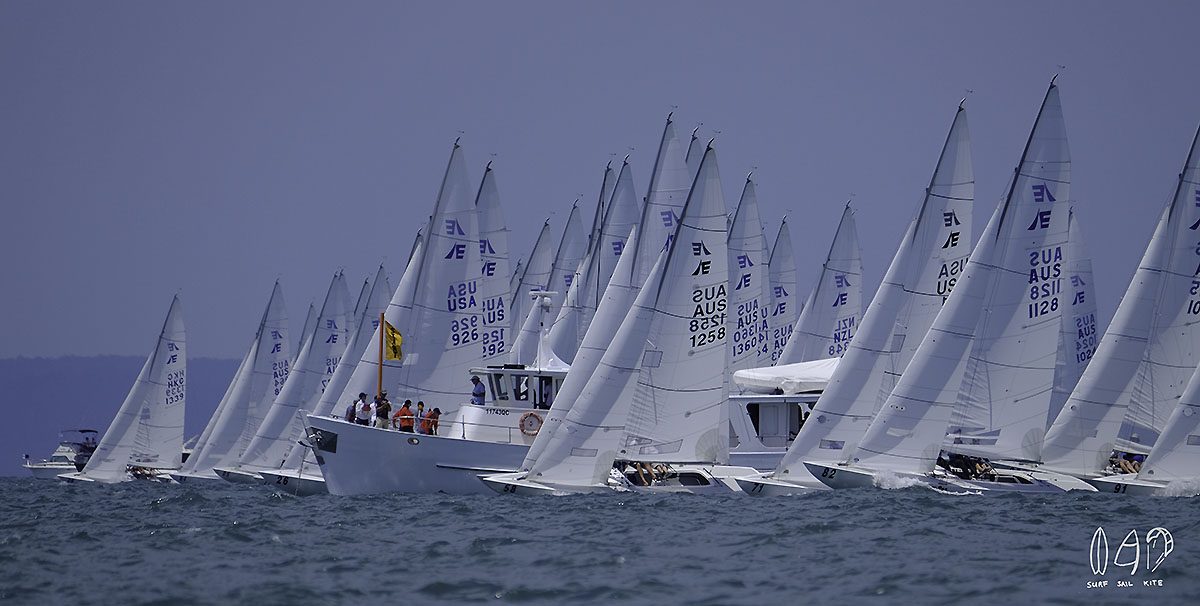 Given all that Clark does as a Governor, Vice-President of the Australian Association, member of the Technical Committee and so on, you might wonder what is the driving force. For Clark he simply says, “It is the Class, and keeping the integrity of it going. I sit on the One Design Committee with some awesome people like Andrew Palfrey, Bruce Nelson, and Skip Dieball, and it is all about keeping the One Design close, and it is this that Members really appreciate. Our job is to ensure it is a level playing field. I am a bit of tech-head (in his day job, Clark is a Patent Attorney) and he does love the engineering and materials aspects. I will take a break from the sailing, but keep contributing the Class, and keep it even.”

Of course this all meant that everything seemed to be going along to plan. Earlier on in the week, it was a question of how many races might they get in? During Chooklotto, a game to figuratively put your money where your mouth was, I actually selected six. So today I am absolutely delighted to report that I lost. Big time. Now as a direct result of race eight being abandoned today after two and a half legs, the crews have been asked to get out on the water early for racing from 1030hrs. No new racing can begin after 1500hrs (AEST), so it is clear that the Race Committee is keen to get a full compliment of nine races in for the championship. 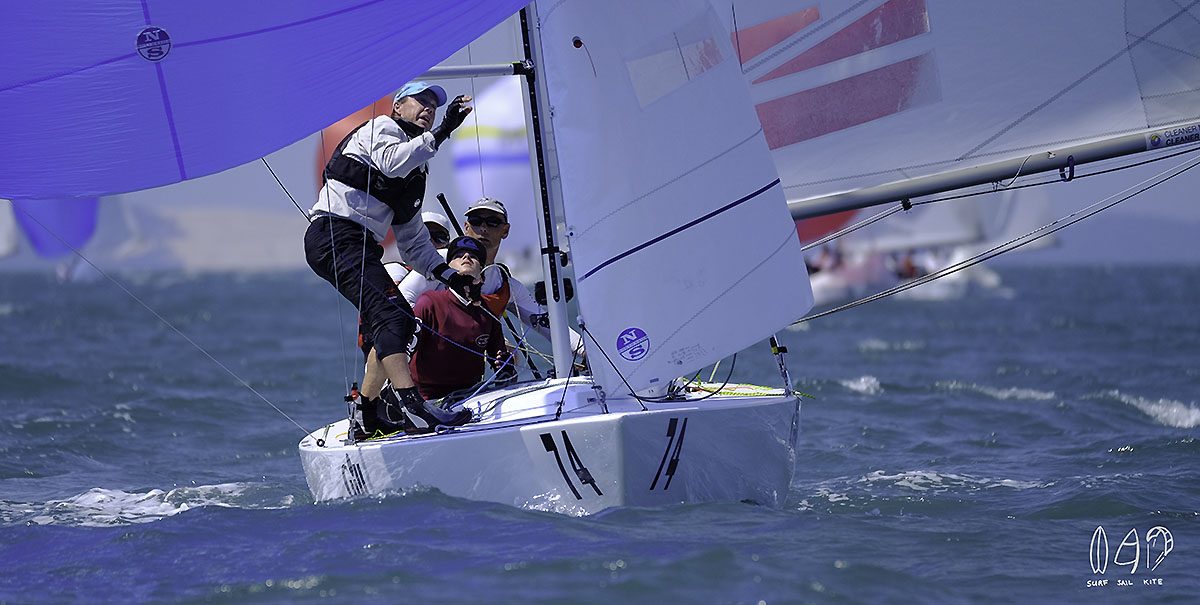 So then, leading into the final day, the overall win, along with those for the Master and Senior Divisions too, lies in the hands of Martin Hill’s, Lisa Rose (AUS 1449). She is crewed by Julian Plante (no stranger to the Class himself), Sean O’Rourke, and then a talented local sailor by the name of Mat Belcher (who can draw on eight 470 World Championships as just part of his CV). 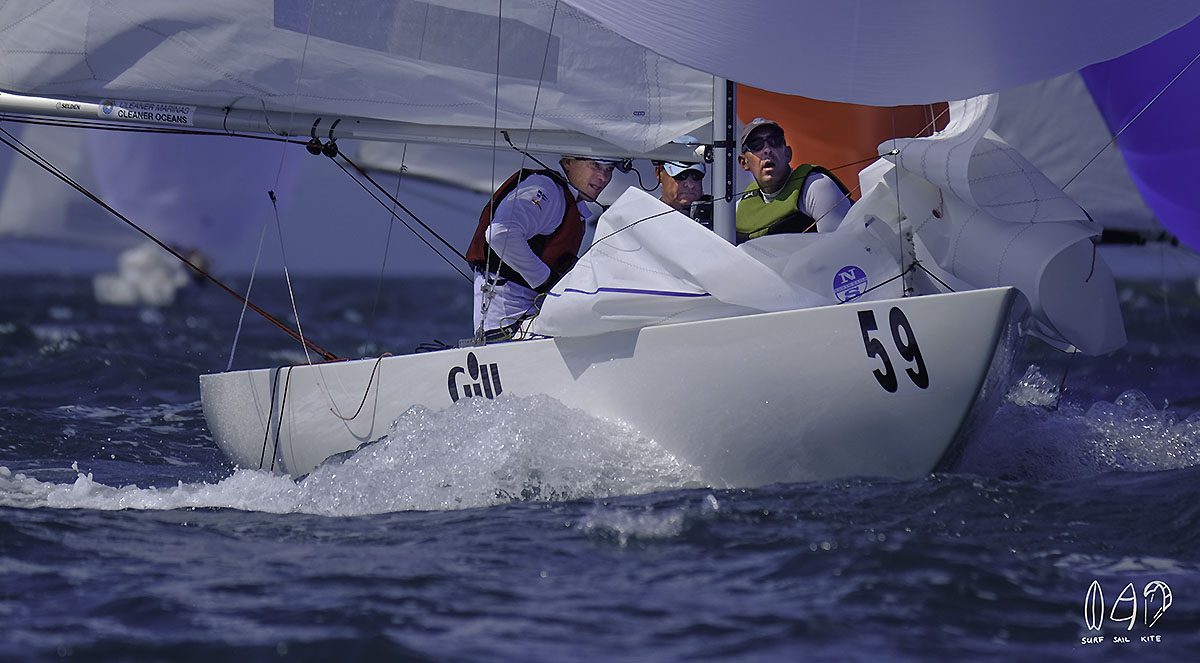 Catching up with Hill aboard his boat on the eve of the last day, we talked about what it all might bring from here, given that he was sixth at last year’s World Championship in San Francisco. “The competition here is just unbelievable. Today at the top mark there was John Bertrand, Steve Benjamin and Tom King there, and these are all Olympic stars. To be able to be matching these guys is a great privilege. This is the best competition in Australia, and this is the biggest fleet I have sailed in. Yes the Farr 40s have given me great and wonderful memories, sailing all around the world, as well as all those terrific people you meet, but this really is a notch up, especially on our home waters, as such.”

“Here the stars are all driving, where as with the Farrs it was an owner/driver rule. So I am a new kid on the block, even if a little grey haired of course. We have a great team, and then my Son in Law, Michael Blackburn to be our coach. You know there is one thing you do need to say about the Etchells, and that is the tremendous camaraderie. No matter whether it is Iain Murray or Andrew Palfrey, or whomever, they all help us and everyone helps each other too. I find that so refreshing. Everyone improves that way. We have been training with both Tom King and David Turton, and this just shows how well everyone binds together.” 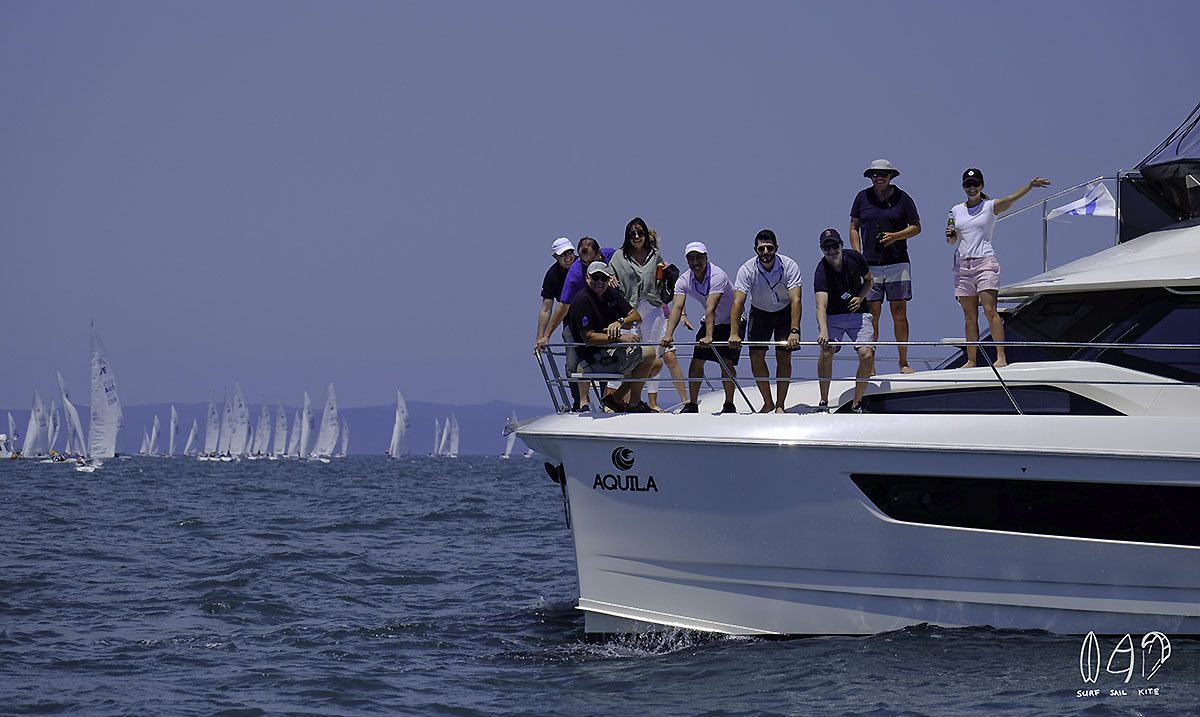 “This really is the most incredible aspect of the class. We are very thankful for that, but you do always remember that you can be chicken one day and feathers the next. It is so difficult, and the long 1.2km line here, and just a shift on that first work can give you 15 places before you know it. Get on the right end of that and it is great. The wrong end, and well, it is hard to pass 40 boats.”

“We’re just enjoying tonight on the basis that we have achieved this position going into the final day, all the while knowing how easily it could change tomorrow. We can pat ourselves on the back a bit, and I feel we have won the top mark award, if there is such a thing, given how many times we’ve been there without a race win, so far. I get a great feeling being there first, and I guess it just means we must be slow downwind… We are always learning, each time we sail.

Should it all come to pass, Hill merely says of daring to dream, “It would be unbelievable. It is a process, and if it happens it will be wonderful. I might even do a Malcolm Page and jump off the boat, even if there is a shark around!” Lisa Rose holds a three-point buffer at the top of the table over Gen XY, who are further seven points in front of Racer C. 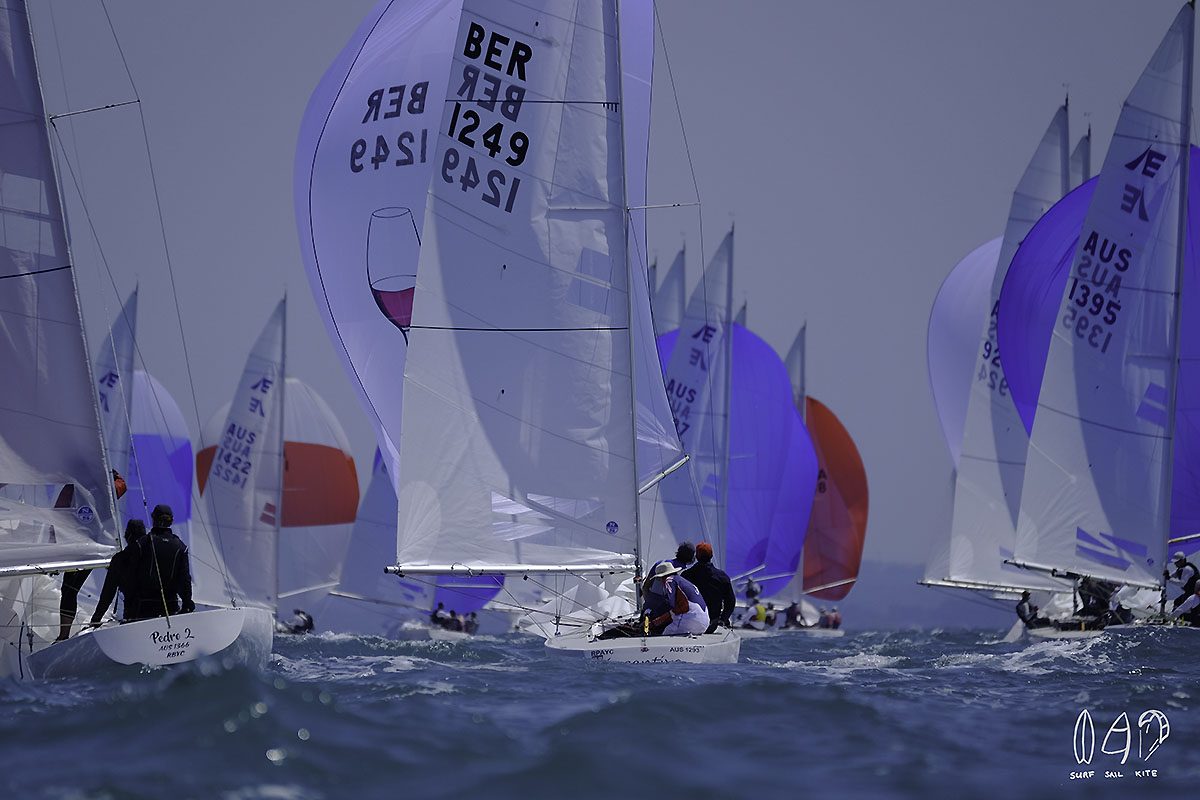 The Corinthian Division is by far the biggest in the fleet, with over 50% of the armada contesting for this most coveted of trophies. The leader is currently in 16th place overall, with a Black Flag from Wednesday’s racing really hurting them. Like they don’t already know that… Anyway, Iron Lotus is no stranger to the podium, having won the recent Pre-Worlds, and the 2012 Etchells World Championship, as well. AUS 1442 is skippered by former Olympic Gold Medallist, Tom King, with regular crew Ivan Wheen and David Edwards, and the ‘new’ member is Greg O’Shea.

King commented quayside, “We’ve always raced in the Class as Corinthians, which we really enjoy. Certainly we’re very happy to be in this position at this stage, so let’s hope it stays that way”, reflecting on the 18 point buffer they have over, The Hole Way (AUS 1306) – Grant Crowle, James Mayjor, and Joe McMillan.

“There’s still 190 points on offer to the highest bidder, so we aim not be involved in that. We’re going to be careful after that Black Flag incident, and anything can happen. There is certainly a whole bunch of very talented Corinthian crews there, and we have all been up and down the leaderboard a bit in this regatta, so you do need to be a little philosophical about it all. We could go up ten and down 30 places tomorrow, so we will just have to wait and see.” 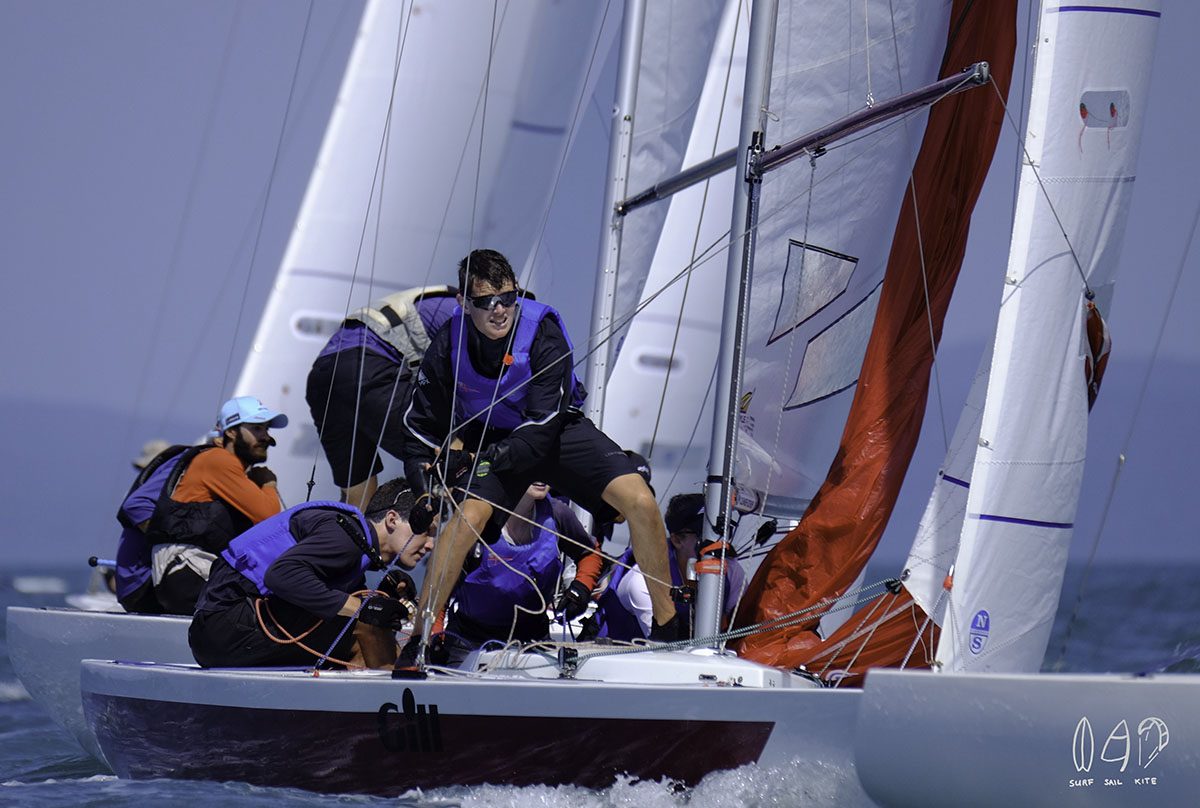 Reflecting on the win back in 2012 off of Sydney Heads, King said, “This is much harder and a lot more competitive. The conditions here are lighter winds with relatively flat water, and the crews all seem to be very even in speed. In a 94-boat Etchells fleet there are a lot of excellent sailors out on the water, which makes it hard, so full credit to those who are doing well!”

The final day of racing is tomorrow, Saturday October 27. At the end, not only will the overall result be known, but also those for the divisions, namely Masters, Grand Masters, Female Helm, Youth and Corinthian, with the latter all having amateur status.

The Royal Queensland Yacht Squadron in the Brisbane suburb of Manly will host the 94-boat strong armada for the 2018 Etchells World Championship, as they tussle it out to see which crew reigns supreme. Racing begins in earnest on Sunday October 21, and concludes on Saturday October 27.  Now to find out all you need to know about the boats, on the water, off the water, simply go to https://etchellsbrisbane.com.

previousEtchells Worlds Day 4 – The three not the 300!