On shore this morning you felt that it was going to be a grand day. The time had come. Race one, and even race two were upon us. A champion crew was soon going to be determined for the 2018 Etchells World Championship being held on Moreton Bay in Brisbane, Australia.

Yet once out past Green Island, there was less of the 8-10 knots from the Sou’east that had blessed the grounds of the Royal Queensland Yacht Squadron in Manly, and much, much more of the three knots or less, and from anywhere ranging from 010 to 110 degrees. So it was not surprising at all to see the Answering Pennant hoisted before the midday hour arrived.

Some thought we might see some action by 1300hrs. Others went for a more realistic 1430hrs, which ended up being much closer to the mark in the end. This also meant it would be a one-race affair for the day. So with more than a couple of hours to kill, shade became the commodity in requirement, and so tarps, umbrellas and other items began adorning craft, as their sailors sought shelter from the powerful sun. 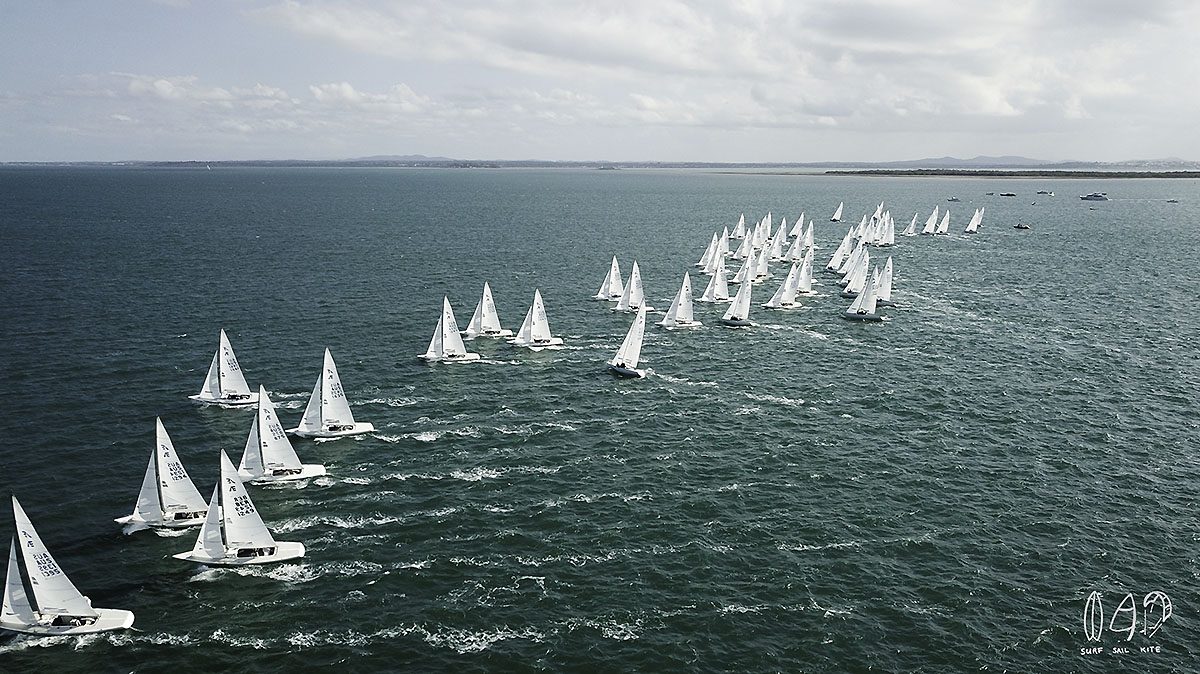 The good money was placed on a U Flag start being adopted, which meant that effectively you were going home for the day with no racing and no result, and alas for one craft this did occur.

The Race Officers had been clear about this, and so it was good to see that the fleet adopted a no nonsense policy when it came to starting, even if it did mean the spectators were not going to see the usual three or maybe four goes at getting a clean start away. With a 1200m long start line and a 2.5nm haul to the top, all the patience had been used in the waiting, so it was totally clear that it was all about the business end of the game out on the water today.

Today the right of centre was favoured and would be at least 12 knots from the Sou’east, but at the windward mark the increased tidal flow and shallower water meant the waves did stack up a little bit more, especially once that tide fully turned and you had it competing with the wind.

Ultimately the winner was Havoc, (AUS 1461) which is skippered by Iain Murray, with Grant Simmer and Richie Allanson on board. Of course, none of them really need any introduction, so in speaking with Murray afterwards he said, “It is nice to start the regatta, and sail well in the first race. There are a lot of anxious people out there, so getting a good start and first beat to windward, where you can find your rhythm without too much angst is a great way to begin a campaign.”

On the second work to windward they did do well, which Murray commented on, “I think we had a good rhythm in the boat, and we have been working hard on our trim in the last couple of days with our coaches. We have found an easier way to sail the boat, which allows us a little more flexibility in the waves, and not as cranky boat as we’ve had in the past.”

“With a hundred boats and all the spectator craft it gets really choppy, very quickly. If you get a good start then you are in the clear, but when you come around the leeward gate for the first time, and all hell breaks loose. There are boats everywhere, and chop, and all of a sudden you’re in entirely different conditions.” 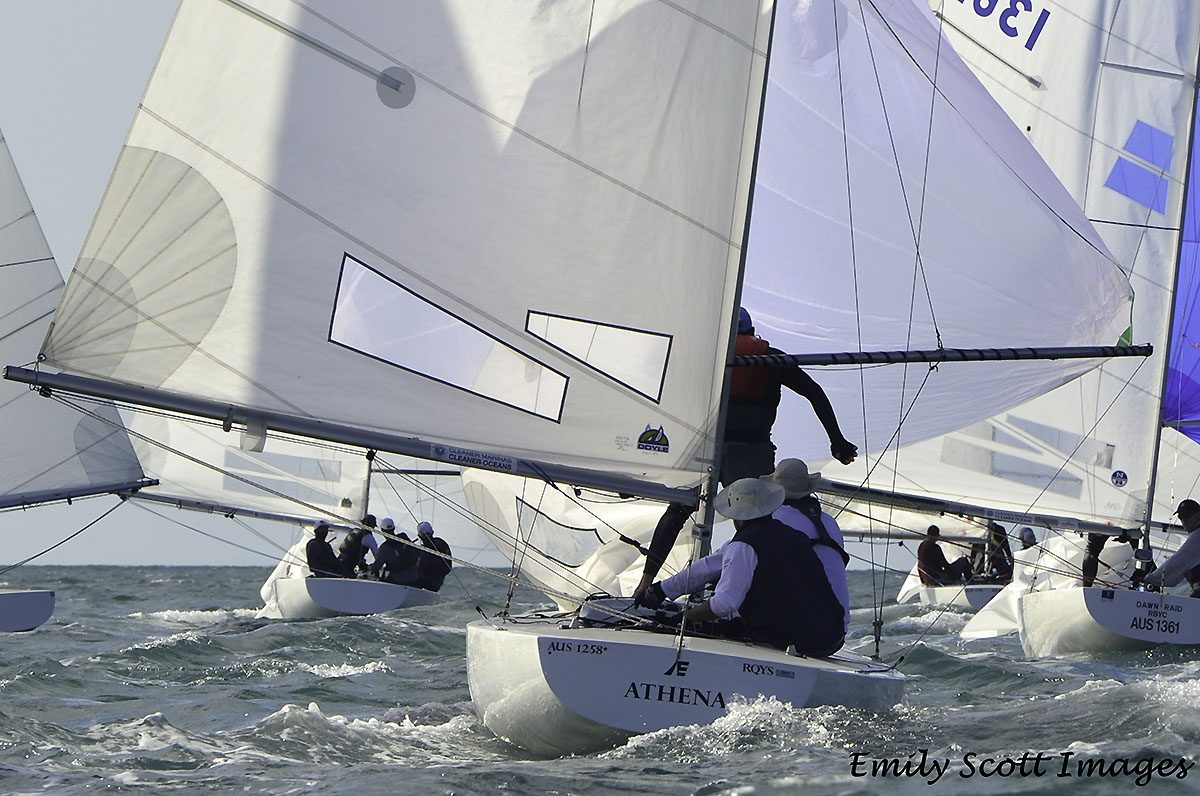 “To get through all of that, and I think we transitioned that really well, so we made a gain on Lisa Rose (Martin Hill, Sean O’Rourke, Julian Plante, and Mat Belcher), as well as some breathing room on the crews behind, which in turn allows us to be a little more aggressive on the tack. There is certainly some advantage for being in the lead group, and hopefully we can keep the train going!” 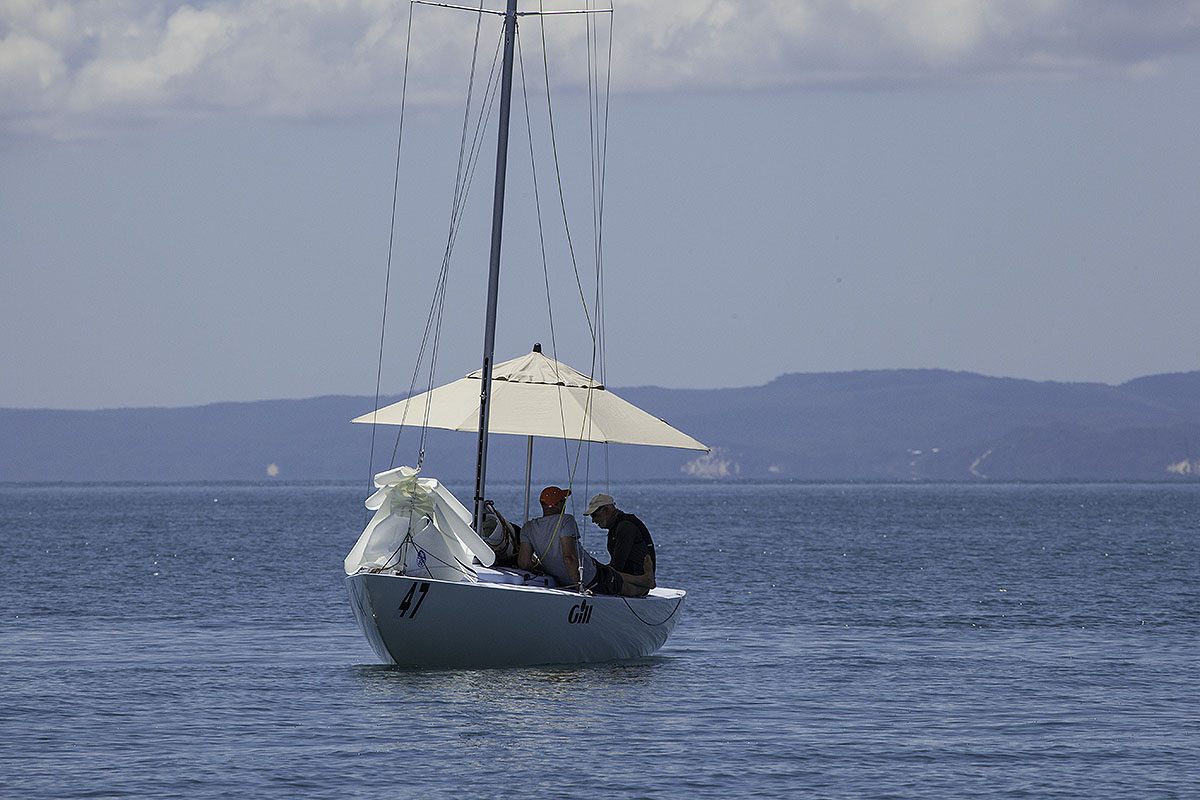 Speaking of huddling very much under the large umbrella that adorned Magpie (Graeme Taylor, Steve Jarvin and James Mayo), Murray said, “We’ve been working with Magpie and also 1435 (Jeanne-Claude Strong, Marcus Burke, Seve Jarvin and Jeni Danks) for a long time. They have been great training partners. They keep it real, and have space for some humour in amongst it all. Just good people.”

Of tomorrow, and all the days ensuing until Saturday, Murray simple said, “I think a regatta like this is all about not making a lot of mistakes and maximising your moments!”

Indeed there were many a smile inside the top ten places today. Gen XY (AUS 864), which is crewed by Brian Donovan, Ben Vercoe, Ash Deeks and skippered by Matt Chew, who said of their sixth place today, “We’re super stoked to get race one over and done with a good result.  We sailed clean and fast, are really looking forward to tomorrow”

Mark Thornburrow was all smiles in the clubhouse afterwards, and why wouldn’t you be when your Racer C (HKG 1406), crewed by Mike Huang, Alexander Conway and 470 star, Will Ryan was in a very solid ninth place.

Yet without any doubt at all, seeing AUS511 (Grand V), so a very old boat indeed, and one of the only ones around with coloured topsides still, collect eighth place was wonderful. To learn that this is indeed part of the Royal Prince Alfred YC’s Youth programme (under 25) was even better.

William Dargaville, Sarah Parker, James Farquharson, with David Chapman filling in today for Jessica Angus, were both very relaxed, and also really excited by their efforts. Talking with them all ashore, the group commented that, “The highlight has to be that race. The close racing really is what it is all about. We do like the challenge and technical aspects, sailing offshore here with the big fleet really has cemented the whole notion into our minds, as we got to see the craft come into their element.”

Will and Sarah are no strangers to keelboats, with the 2016 Youth Match Racing Championship to their credit. “There are a lot of technical details that mark the difference between those Elliotts and these Etchells for us to get our heads around. So with Jess coming on we hope that they can perhaps even get a bullet”, added Chapman as he stepped off.

Reigning World Champion, Steve Benjamin, with Michael Menninger, Ian Liberty, Jonathan Goldsberry, on board Stella Blue finished in 18th place today. Benjamin commented quayside, “The race course was absolutely perfect. The race management was spot on, and they waited just the right amount of time to get the race away and it was dead true. 120 degrees was a perfect course. We were quite surprised by the tide change. It was a little more than we were expecting, but it worked out in our favour, so we’re happy about it. It was a really challenging racetrack, we’re having a lot of fun, and really thrilled to be here.”