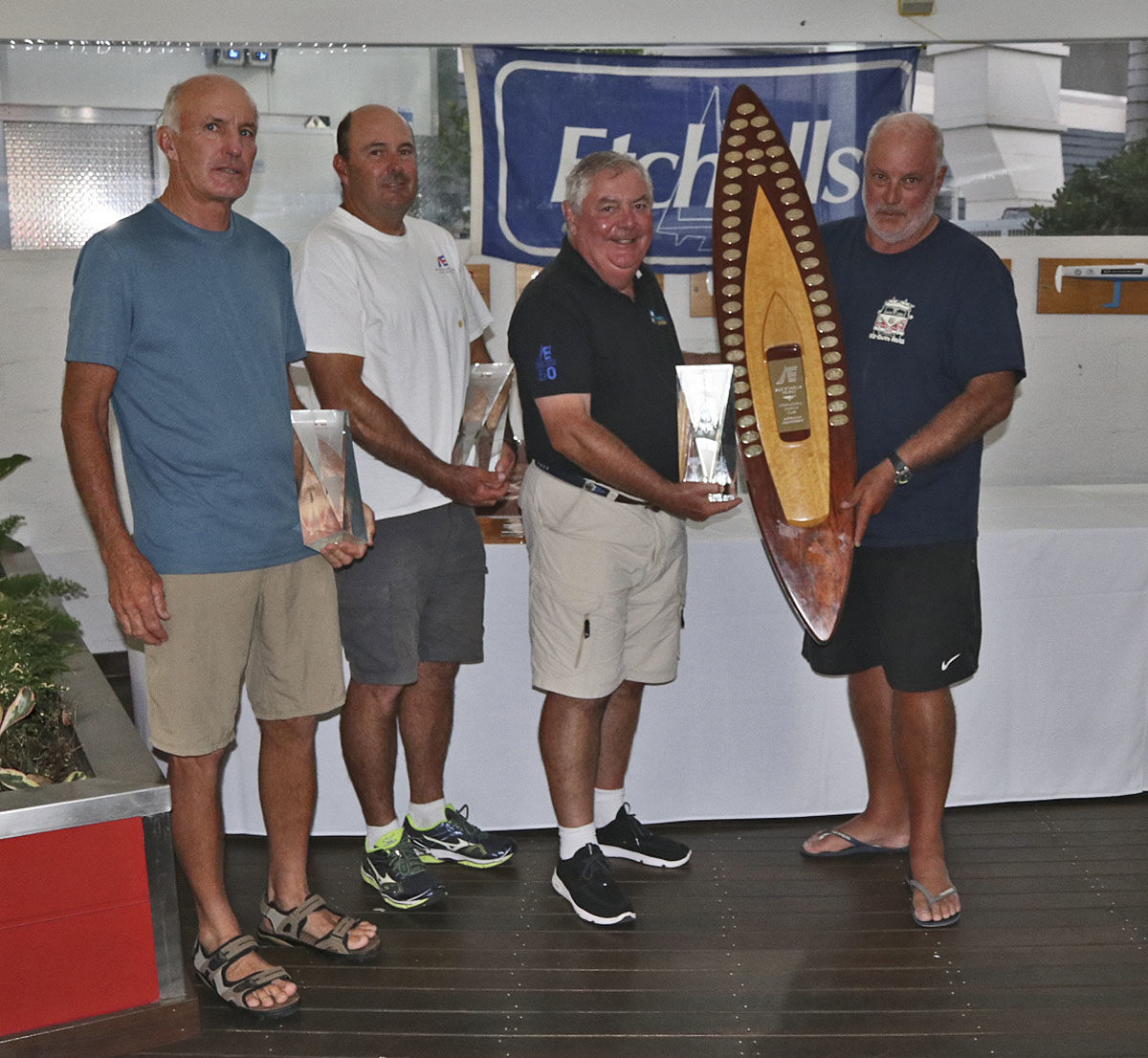 Best was yet to come?

Arguably it was, but you certainly had to wait for it… Mind you, there was nothing wrong with the theory overall. Get them out there nice and early, enjoy a race in absolutely stellar conditions, complete the series, get the boats back on their road trailers, and then finally, have a presentation in the convivial surroundings of the Royal Queensland Yacht Squadron.

So yes, once the Answering Pennant had been given a couple of airings, and the cloud that was causing all the issues had finally moved on overhead towards Lota, the breeze settled into its familiar ENE and 8 knot mode. We were off. However, the dreaded U Flag that had been capturing victims all week, felt it need to have the last say, and how. Overnight leader, Gen XY, along with Tango, would be sent home for being On Course Side. Doh. Very sad for Matt Chew, Brian Donovan, Ben Vercoe and Mitch Kennedy, who up until that point had been so, so consistent, and also kept their noses very clean.

The Championship had now opened up, and how. Yet it would not be long before some very, very seasoned sailors with CVs the envy of anyone would stake their claim. Before that occurred, some others put heir bows in front. The first was the Log, with Mark Bradford, Vaughan Prentice, Darren Hutchinson, and Mitch Miller on board, who lead us up to the weather mark for the first time.

Then on the run, Forte (Mark Crier, Andrew Harry, and Robbie Gibbs) took over. On the next work to windward, however, it all happened. AUS 1461, Havoc, charged through to be in the lead at the weather mark, and then stepped on the gas from there on.

Colin Beashel, who was doing main, with Richie Allanson on the bow and Iain Murray as Skipper, commented afterwards, “It is nice to finally win an Etchells Australian Championship. Obviously I have not won one of them before, and it is a good feeling. It was good sailing with Richie and the Big Fella, and it is always nice to sail those blokes. It’s a good, tricky venue, with great racing, and nice sunny weather. Perfect conditions, really.”

Tide came into the calculations today, and it was noticeable by virtue of not having been much of an influence over the preceding three days. “Yes, it was challenging. It was certainly running up that left hand side more, and the water was choppier. We were in a bit of trouble early on, but managed to get over there, and into the pressure, and from there, back into the race itself. It was definitely the secret to the equation. Better tide, better pressure, and allowed us to deal with some of the other little flicks to the right that came later in the second work, and third too for that matter.”

Asked if we would see more of him in Etchells, Beashel said. “I don’t know. See what happens. I might be doing the NSW States (Gosford next month), as the Big Fella has something on, so I might have a steer. But it is all downhill from here at the moment. Maybe I should stay off the tiller, and keep to the middle!”

Interestingly, Richie Allanson is the only one from the crew to have won an Australian Etchells Championship previously. In fact he’s done it twice; once at Brighton and the other at Fremantle. So he’s two up on the other two members of the crew, even though both of them are previous World Champions in Etchells amongst their many, many accolades.

“I am certainly looking forward to Gosford next month, and I am a buzzing a little right now as it all sinks in. This was much needed after our Worlds campaign, where we had the potential to do well, but fell short, which is a tough thing to go through. So to bring it together this week was a big thing for the programme.”

“We had some different set ups on board for this title, and it is a good looking future. We are planning on doing Texas (2019 World Championship at Corpus Christi), and long term we are getting ready for Freo (2020 Worlds).”

“We do really feel for the Gen XY crew, who had been doing so well. However, the ball was in our court, it was not a given, and it is good to see that we rose to the challenge. Winning the last race sets a good tone. The practice race (which they won) was our first since the worlds, and the three of us had not raced together since September.”

“The competition is hot in Etchells, and the bar has been raised, so you have to get cracking and think. There is lots of talent sailing around, and the class is a good position”, Allanson finished by saying.

Iain Murray was clearly very happy with the win too, “Been sailing Etchells that long and I think the memory is not what it was, so to get a national title is great, as I have not sailed that many of them (but has won at least five State titles). It is nice to come up here and win, and great to be sailing with Richie again, and Colin who I have been sailing against since we were ten years of age, so it has been a long journey.”

“We have been in opposing camps, and to be here sailing together as one team, which Richie has been the conduit for is fantastic. Colin and I live in the same suburb and we are sharing it and enjoying it, which is terrific.”

Martin Hill, Julian Plante, Mat Belcher and Sean O’Rourke climbed onto the podium to be third overall, as a result of a solid day. Hill, the reigning World Champion, spoke afterwards, saying, “We won the first race, which was great. From then on we were pretty consistent, and in the top ten mainly. No UFDs either, which certainly hampered a lot of crews here this week. We came into this regatta knowing about a couple of weaknesses, downwind especially; so learning to sail through the fleet was another positive from it all. We had to earn it all, especially when coming back from being quite deep, so we are pretty happy.”

“I think it was a great step forward for our next World Championship campaign. It is such great racing because of the crews you are up against, and I just love it. I could do another race, it was just so beautiful out there.”

Taking out the Corinthian Division (no pro sailors on board) was Animal House. The finished in 8th spot overall, which is also such a good effort and tremendous sign of their improving pace throughout the week, as Dirk Van Der Struyf, Ben O’Brien and James Hannah had not sailed together before.

Van Der Struyf commented once back ashore, “Yesterday I had hoped we would be talking again today, and here we are. My wish has come true and it is nice to be here on the dock after a fourth today, which was a good result. The boat is going well, and the boys are working brilliantly as a team. A mistake free race was also an added bonus, and Ben and James picked the shifts really well, especially downwind.”

“Really pleased to be sailing at the front of the fleet with some pretty talented company. When you’re crossing tacks with the Big Fella (Havoc) and GT (Magpie) it is really rewarding for the crew and myself. It makes us want to come back for next time. I think we might look at Mooloolaba as our next event on the East Coast. In the meantime we have the WA titles in March with my local crew.

Brisbane Fleet Captain, Noel Paterson, commented on it all, “Well, following on from the 2018 Worlds, I think we put on a regatta that you would love to come and sail at. The weather really turned up, with some of the best Champagne sailing I have seen, this time from a RIB unfortunately, as I did not sail. I hope people leave feeling they had a great regatta. We are pretty pleased, our volunteers did a sterling job, so yes I am pretty happy to have another super regatta all completed.”

Ultimately, well done to all the competitors, the Brisbane Etchells Fleet, RQ and the countless volunteers for a great regatta. Etchells racing continues next month with the NSW State Championship from the delightful Gosford Sailing Club. The West Australian and Victorian titles follow on from that. Please keep and eye on Facebook, and the Australian Class website for updates.