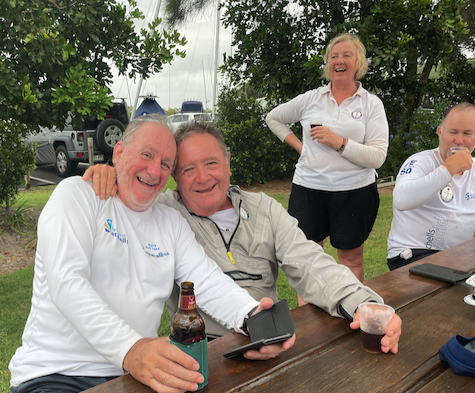 It came down to the final day of racing to determine this year’s squadron championship winner with Patto and Heals tied on points going into the final day of racing. The day started with drama. BBQ Chef extraordinaire Chris tested covid positive on Saturday morning meaning Jason and Jim had to take on BBQ duties for the pre race sausage sizzle. Of even more concern was Patto’s bowman Will calling in positive as well, leaving Patto with a last minute scramble to find a replacement. Liam – formally of The Saint stepped up. Just to add a bit more drama Patto felt the need to take a covid test before coming down to the club leaving a nervous wait for his crew. He duly showed and the battle was on.

We only had 4 entries for the day. Due to Chris’ withdrawal, Jason took the helm of Chaos Theory with Tony being promoted to the bow. Dave Smith joined Helen on Etchellence for the day. The forecast was for anything between 13 and 20 knots from the south east which made the boat set up an interesting dilemma.
As I mentioned Rapscallion and Waterloo Too were tied on points going into these final two races. They also had an identical score card meaning that if they were tied at the end of the day the championship would be determined by a countback based on who won the last race – game on!!!

Race one started in about 14-16 knots with Waterloo Too at the boat and Rapscallion a little further down the line. They both hit the line at pace and it didn’t take long for both Chaos and Etchellence to be squeezed between them and tack off to the right while they continued out to the left. Neither obtained an advantage but Rapscallion blinked first tacking and crossing behind to avoid being trapped on the layline. Patto wasn’t going to give anything away and after a few short tacks Rapscallion had to settle in on his hip for the long port tack drag to the top. Patto had a comfortable 4 length lead at the top. With the left heavily favoured they established a big lead ov erChaos and Etchellence. Rapscallion gained a length or so on the run but not enough to make a difference by the bottom.

Around the bottom and with Patto protecting the left Heals wasn’t left with many options. Bring on the tacking duel!!! After ½ a dozen or so tacks Rapscallion had halved the gap down to less than two lengths at which point Waterloo Too decided to let Rapscallion go left while they went for straight line speed out to the right. Much to Rapscallion’s dismay Waterloo got a small right hand shift to have a comfortable margin at the final turn. Meanwhile Chaos and Etchellence were also having a great battle with Chaos having to do a pirouette after an P vs S incident halfway up the beat. They grabbed 3rd back on the run to finish just ahead of Etchellence. Meanwhile Waterloo Too had a comfortable win about 15 secs ahead of Rapscallion – 1 nil to Patto!

Race 2. Chaos retired after the first race – apparently sailing at the pointy end broke Tony, leaving just three in the final showdown. As long Etchellence didn’t get between the other two the title was going to who ever beat the other. It was all on. With a few minute to go Dave went on the attack hunting Patto pushing him away form the line. The clock didn’t matter for this start. Dave led back to the line with Patto on his hip – both about 20 seconds late. Meanwhile Helen and her crew misjudged the time but still had a good start.

Halfway up the beat Etchellence had the lead while Rapscallion and Waterloo Too were battling it out. Rapscallion had crossed Waterloo and had them pinned to leeward for a long beat to the top in a reverse of the first race. Rapscallion managed to tack just in front of Etchellence on the starboard layline with Waterloo tacking behind Helen to round in 3rd.  With Rapscallion trying to keep their wind clear Etchellence pulled alongside, and they fought for the inside position for the bottom mark. Patto saw this as a chance to go for a clean rounding of the left-hand gate. Rapscallion rounded ½ a length before Waterloo Too with Etchellence right on their transom. This created a split between the two title contenders. They came together ¾ the way up the final beat of the season. Rapscallion slam dunk forcing Waterloo Too back to the right. With Waterloo Too on the starboard layline Rapscallion went for the tight lee bow as they couldn’t cross but as Waterloo rolled over them they couldn’t lay the mark while Waterloo Too shot the mark to have a 3-4 length lead at the top. If it stays like this its 2-0 to Patto.

But as in any good Etchells race there was still drama left in this one. It didn’t take long for Rapscallion to pull alongside on the run and at one point was even a length ahead. Coming into the gate mark for the final gybe to the finish it was neck and neck. 50 metres to go and the title was still on the line! 25 metres to go and it was still neck and neck and a slight pin end bias favouring Patto. At this point Rapscallion caught a couple of waves to surge ahead to get the gun by a second and take out the championship. Though the RC announced the result over the radio Dave wasn’t prepared to believe it until he saw it in writing. What a great finish to the season. Helen and Etchellence crossed not far behind to grab a well-deserved podium.

The day rounded out with drinks at the hardstand followed by some celebratory and commissary drinks back at the bar.

It was a frustrating season with a larger than usual number of races lost to the weather, but it was great to welcome 3 new crews to the fleet this year. They all improved significantly as the season went on and we all look forward to an even more competitive fleet next season.

A big thanks goes to Jason, Chris and Tony who put a lot into the fleet this season and to Dave Smith who put in a number of hours working and sailing with some of the new commers to help them get up to speed. Thanks guys.
Well, that’s a rap for 21/22. See you all next season – if not before.