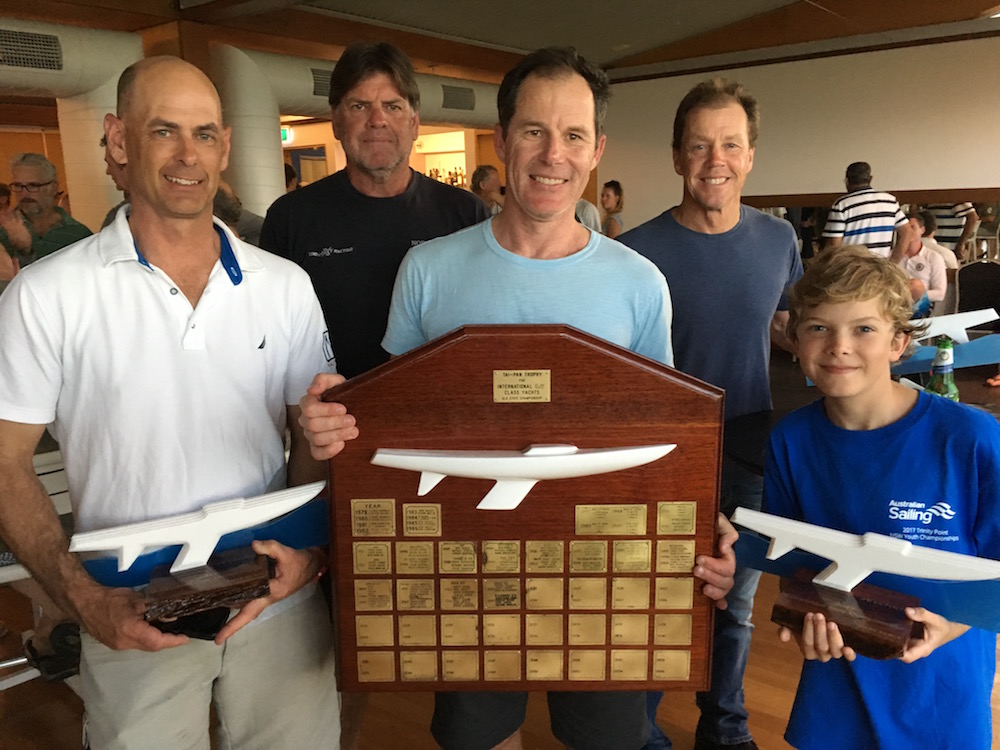 Yes it was very much all about being close at the 2017 Etchells Queensland State Championship. Held on the magnificent waters of Moreton Bay, on the very same track that next year’s World Championship will use, the Brisbane Fleet ran yet another successful event from their base at the Royal Queensland Yacht Squadron in Manly.

So just how close was it all? Well there were 39 entries, which is close to 40. Now in these modern times that is very handy for a national or world championship, and quite the impressive feat for a State championship. Around the world the Etchells are quite the close family, and also very welcoming, to which the Brisbane Fleet adds their own unique, relaxed, soothing, and entertaining elements that truly creates something special.

Of course, out on the racecourse it was right in close for the nitty gritty, no matter whether you were talking about the podium positions, or something way deeper down the list. That very closeness on the leader board meant there were constant changes to the whole scenario, much to the delight of the many following it all on social media.

This meant the excitement continued to build throughout the three-day event, with almost continual leadership changes by just one to two points. Then the very same crews would be right there together at the mark roundings for the very next race. Honestly, it does not get any closer than that, and by way of example, after Race Six, first, second and third overall were in those exact same positions going into the top mark for the first time, as well as the bottom gate, then it all swapped around a little.

Now the sailors could well have had too much on to notice that much, but to the amassed on water spectators and the crowds online, this was what they had come to expect and see from the Etchells, and weren’t they thrilled they got it. With the possible exception of the event organisers, no one could have been more thrilled and delighted, as well as possibly nervous, passionate and hysterical.

Given that the 2018 Etchells World Championships are now just under one year away, and that time flies when you talk about the planning, organisation and travel that happens when everyone comes together to run and participate in something like that, then yes. What once seemed so far away is now all very close, indeed!

Afterwards, Brisbane Fleet Captain, Noel Paterson commented, “We felt the regatta was accepted extremely well by all the competitors, as the feedback that we asked for, has been largely positive. There are a couple of operational items that we need to focus on for our next regatta, which is the Brisbane Fleet Championships in April 14-15, 2018.”

David Irvine, the Chairman of the Organising Committee for the 2018 Worlds added, “From our perspective, this regatta was the first of several test events for next year. It was a great opportunity for the Wilsons (Brothers Kevin and Ross) to work with our RQYS volunteers, and to introduce the racetrack to competitors. We are on track and will be holding debriefing sessions this week. The facilities and the Club are fantastic. All we need to do now is encourage as many Fleets as possible to take up their full allocation, and come the Brisbane next year. We would also very much like to thank our terrific sponsors in Moreton Bay Signs, Gill, Nautilus Marine and Angove Wines.”

Yet it would be from the winning boat that perhaps one of the most exciting aspects of a regatta like this would emerge. His name is Mitch Luxton, and in his words he states, “It was an awesome regatta. The competition was pretty cool, and I want to thank everyone on the boat. Out there on the water it was just so close and competitive. I started sailing when I was about four years old, and we went to the Whitsundays on our big yacht. Since then I have been progressing up through the dinghies. I am 11 now, and sailing Optimists at RQYS. The Etchells are pretty fast, compared to Optis, but the competition is very serious and you have to tweak a lot of stuff. I am definitely looking forward to sailing more Etchells.”

So then it is time to reveal just how close it all was. The winners were, The Cure, which was Class Governor David Clark, with Alan Smith, Mitchell Luxton and Ray Smith. They finished on 17 points from the seven races with one discard (a DSQ), and had a sixth as their worst effort.

Clark commented, “The Race Committee did an awesome job with this regatta. The track is challenging, but is very fair in terms of balance and tide. It is a great racetrack and we loved it. Looking towards the 2018 Worlds I am not sure what direction I’m taking with the whole programme, but we are delighted to win this one. We have invested a lot of time in this racetrack, so we understand it and we have a good playbook. We are just stoked to have won the event, finally!”

Two points astern were the reigning Australian Champions for the last two years, and runners up at the recent World Championship in San Francisco. Magpie, which is Graeme Taylor, James Mayo, and Steve Jarvin are one formidable outfit, and their drop was a tenth place, so that goes some way to explaining how talented and revered they are.

Taylor, or GT as he is best known, said, “It was a great regatta, and a fantastic venue to sail. We haven’t done a lot of out there over the past 10 years, so it is good to start once more, and it is at the same time as the Worlds next year. We were quite surprised at how hot it is at the moment, especially for Victorians. I am feeling effected by the sun from the last couple of days, we will have to work on our hydration levels, especially having spent the last month sailing in San Fran, which is also cold; it has been a shock to the body, but we had a great time.”

“It will be hard work out on the track next year with 100 boats on it, but it always is. The Club and the facility are phenomenal. It is just amazing what you guys have got here. We will definitely see you here for the Worlds, and will try to do our absolute best.”

In third place and a further four points behind was Yandoo XX, which is crewed by Jeanne-Claude Strong, Seve Jarvin (Steve’s son), Marcus Burke, and Tiana Wittey. Ever the competitor and an absolute delight to be around is JC, as she is affectionately known. Strong commented, “The regatta was really exciting and I just love the competition, it is very hard with a very high level of competition.”

“The track is fabulous, but there are not enough ferries, which is the trouble when compared with Sydney (referring to their right of way under all circumstances and the changes that can bring about). Dave (Clark) sailed really well after our close battles here over the past so congratulations to him, and his crew. We are building up to the 2018 Worlds with the regattas in Sydney (The Goblets) and Perth (National Championships), and the regattas being hosted by the Brisbane Fleet in April and September 2018, so we are very much looking forward to being here many more times next year.”

One person who can feel very proud was not even racing. He is the inimitable and effervescent Nev Wittey, who is the coach of both Magpie and Yandoo XX, as well as being Tiana’s father. “What a lovely regatta, with a tremendous venue, and the people who are going to come here to race are just going to be blown away with the amount of space and these brilliant facilities you have got. By way of example, the car park we launched from is bigger than the whole property elsewhere.”

“The 2018 Worlds here in Brisbane are going to be awesome. The weather has been fantastic, and the whole regatta was without wet weather gear, so the Gill guy would not have got many sales for them (said in jest, of course). Out on the water there are enough variables, with tricky tides on a fantastic patch of water. We will be back for the fleets and other regattas here building up to the Worlds. We are very keen as there is no one who wants to be number one more than the guy that is number two!”

A quick scan down the results sees former World Champions in this Class in fourth, sixth, ninth and even 24th places, let alone the other tremendous sailors from other classes that compete inshore and offshore. Matt Chew was the first skipper to win the Australasian Championship twice in its twenty-two year history. Gen XY are always there or thereabouts and may rue a DSQ in the first race of the series, but a set of good results thereafter saw them return more to form.

Chew said, “It was awesome fun out on the World’s course with all the good teams. The fleet was red hot and we were just on the back of them. We have not been in the Etchells that much this year, so we will be ramping that up as we head into the Worlds.” The full results are available from https://www.sailwave.com/results/2017EtchellsQLDChamps.htm

As for other very important stats, well it is interesting to note that the RQYS had 46 volunteers on the water over the weekend for the Etchells and other regattas they were holding. Drinks at the club after racing on the Friday started the camaraderie the fleet is known for, but it was the 153 steaks (along with sausages and hamburgers – salads too!!!) consumed by them all as part of the ubiquitous David and Sue Healey BBQ that showed how much of a blast everyone was having.

As you have heard, the conditions were marvellous to sensational. On the Friday the wind came in to 15-20 knots from the West, so that proves Moreton Bay can serve up a bit of everything. The sun continued on the Saturday, but the wind clocked back to its traditional Nor’easter ranging from 6-14 knots as the day wore on.

Sunday had a much softer Northerly of 6 knots or so come down the course, so after two General Recalls, Race Management ensured they could get both of the allotted race sin in time by opting for the Black Flag and enforcing everyone to play nicely. The significant fleet also meant that the long line was compensated for by running courses ranging from 1.3 to 1.5nm, mostly with the fleet finishing back downwind to reduce the time between starts.

Kevin Wilson commented, “Huey (the God of Wind) behaved fantastically. There were very little course changes for the whole time, with true up and down courses, so it was just great. Our research says that the conditions this time of year were for a constant Nor’Easter, and apart from that Westerly it was pretty much so. Hopefully it will be the same next year.”

To begin your Etchells journey please see www.etchells.org.au, and to find out more about the 2018 World Championship in Brisbane, please go to www.2018etchellsworlds.org