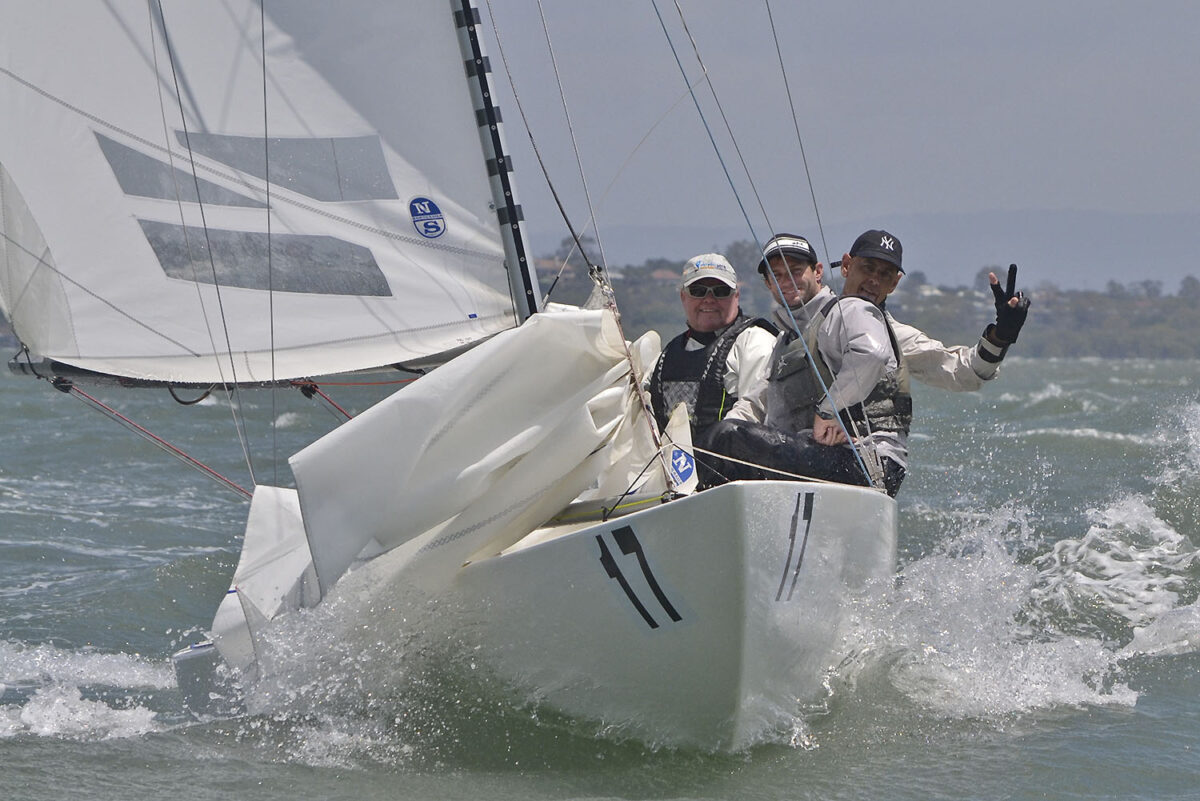 The 2020 Etchells Queensland State Championship was won by The Front Bar (AUS 1317). On board were Australian Sailing Squad member, Joel Turner, Ray Smith, and skippered by one of the Royal Queensland Yacht Squadron’s most notable members, Brad Ginnivan.

Ginnivan is certainly a character amongst characters, but so giving of his time and energy, as well as innumerable items for the club from his business, Moreton Bay Signs.  A tireless ball of energy with strong sense of humour, Ginnivan was quick to recount just how they secured Turner for the regatta.

“A while ago, I was MC for a charity auction, and one of the items up for grabs was sail with Joel. So I was encouraged to put an auctioneer’s bid in to secure the opportunity, and we won. It’s taken until now to make it happen, but he was brilliant. Both he and Ray were great. Both of them called the shots uphill, and I just steered. Joel took care of tactics downhill and to win with a race to spare was just brilliant”, said Ginnivan.

“Our goal was to be in the top five of every race, which we accomplished, except for last where we were ninth. We were eight kilos underweight, and I had put in a new Whale Spars mast that had only done six races before the championship. I also pulled out a brand new North Sails main from the shed, and we used our existing jibs from the (2018) Brisbane Worlds.”

“We had traditional headsail sheeting by the way, and we might have been slightly lower in some instances, but our pace was awesome. We also used our (mast) chocks a bit more as well. Ray made me take my watch off and it was all about looking forward for me. He’s terrific and has now won three of the last four Queensland States.”

“Friday was just beautiful with 10-14 knots, and I remember how we won race two after a gybe set at the top set us up marvellously. Saturday blew in at 25 knots and then some. We achieved 16-18 knots downhill at one point. David Turton (who was ahead of us) recounted to me that he had said to his crew ‘Have a look at Brad!’ Sunday light again, and fluky, but we did win the first race of the day.”

Ginnivan finished by saying, “Joel wanted us to finish the regatta off, so we completed the last race. This is my first Etchells win ever (in a big event), and we got two bullets as well! Mum was in tears, and sent me $100, which we put on the bar. It’s really nice to get a result after all this time. I am pretty stoked, and we beat some serious players in Vaughan Prentice, Peter Conde and David Turton. Ray and Joel were awesome, and I thank them, the fleet, the club and the volunteers so much.”

David Turton’s, Our Thing (AUS 1446), placed second, some three points astern. Reflecting on it all, Turton commented jovially, “Giving him the (mast chocks) secrets did not help. It was all really good fun. It was the first time in the boat since Mooloolaba 2019. We had Josh Torpy, and seasoned Etchellian Ash Deeks on board, and might have gone in cold, but we came out hot!”

Turton added, “We had a blast and racing on Saturday in 25 knots was a highlight for sure. A lot of us have been in the Finn a lot due to travel restrictions. This has been good, and we’ve learned a lot, as we have a large fleet of 30 or so here.”

In third place was Peter Conde’s Encore (AUS 870), and they were also the first placed Corinthian crew. Conde sailed with long time crew Brian Hellier, and Peter Elkington stepped in for Myles Baron-Hay who could not attend. “We have not sailed the Etchells since last October at the States. We are still keen to be involved in the Class, it’s great regattas and very close racing.”

“This one came down to the first race on Sunday when they gybed on the new breeze first and went to the lead. There were lots of changes of places throughout the event, and in flat water with 8-10 knots blowing it becomes very tactical, and a game of centimeters”, added Conde.

“Really glad to collect the new Corinthian trophy, and we hope to have time for Brisbane fleet and Mooloolaba event in 2021, so we can see some of the regular faces again.”

The PRO for the regatta was Guy Morton who pushed for a third race on Friday, which paid dividends for Saturday. “They are a great bunch of sailors, and it’s always good to get out with them. I did really enjoy the Saturday, very exciting and thrilling. Noel Paterson had his whole body on the tiller as they came down to the finish line, and it was amazing.”

“We had two volunteers on the two mark boats, five on the committee boat and all of us enjoyed it the entire regatta. We had great feedback too, which is lovely. RQ has a very experienced team, which makes changes easy, and the fleet was flexile with start times, and that also helps to get all the scheduled (seven) races completed.”

Brisbane Fleet Captain, Jason Hawkins commented, “With lockdowns and restrictions in place around the country, we are extremely grateful to have been able to hold the 2020 Etchells State Championships on the waters of Moreton Bay. It was also fantastic to see five skippers returning to Etchells racing since we hosted the Worlds in 2018. This resulted in very tight, highly competitive racing… and this of course is the reason we sail Etchells. We had 15 in the fleet, with Ben Leigh-Smith making the journey up for the Gold Coast Fleet.”

“We had extremely mixed conditions, and our PRO and volunteers did a fantastic job. Saturday was our most challenging day, with easily 25-30+ knots in highly unstable conditions as the storm front approached. We only got one race in, but got back ashore at 1pm, did the BBQ at 1.30, and then the storms hit at 2.15, so we all stayed around to watch the lightning show.”

In closing, Hawkins added, “Chris Nezmah has taken over the tongs from the Healey family for our world famous BBQ, and brought on chicken wings as his specialty. The next regatta is Brisbane Fleets in March 2021, so hopefully the borders will be open, and we look forward to welcoming back all the sailors from down South for our renowned Brisbane Fleet hospitality.”