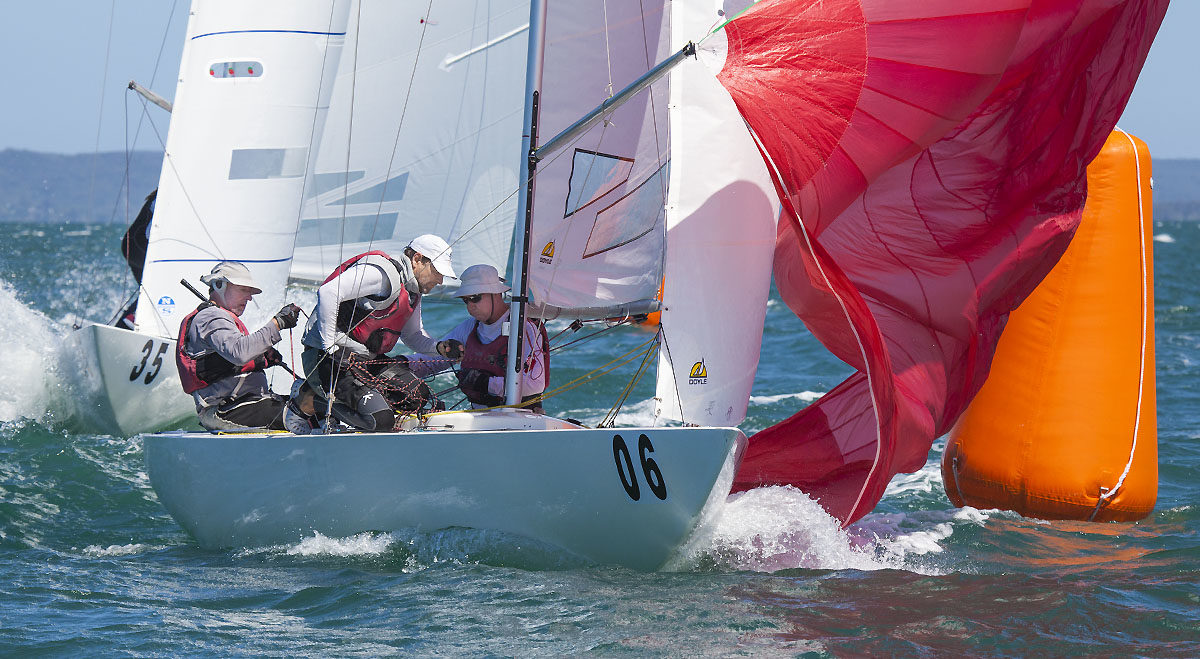 It was quite the thing. If yesterday had been marvellous, then what could you possibly say about the Wednesday, other than it was the day for the now world famous David and Sue Healey BBQ? These have become a must do component of any Brisbane Etchells event, and Wednesday night’s one was just as good as the others, and also included some mid-regatta prize presentations, as well.

Yet the conundrum remained. Perhaps even the weather God’s heard of the issues. For whilst there has been a lot of concern over whether there would be enough breeze to complete a series of seven races, and every model had dire looking predictions, the second day of racing in the 2019 Etchells Australian Championship got two absolutely glamorous races in to take the overall tally to five. Importantly, this now brings in the drop to the equation, but we’ll come to all of that in a minute.

You see, just before it was all so, so good, and even the tide decided to be nice and gentle with everyone again today, you needed to have a sit down, and wait to chat with Patience. You see, she had come to catch up with her sister, Prudence, who ruled yesterday, when three races were completed and set the scene. Well done to PRO Louise Davis and her Race Management team, and their smiles today were just about as big as those of the competitors.

So with a little bit of waiting time done ashore, soon it was time to be towed out to the course. A little more waiting eschewed, not much, but the breeze wanted to go right a tad, and eventually 050 degrees held sway, and six knots got dialled in. It remained in the Nor’east zone all day, perhaps having a wee look further right, and built all day too. It settled in for a classic 12 to 15 knots by the end of the third work in the second race, and 0.75m sheep in the paddock (waves) were sliced by the Etchells oh-so-effortlessly. Perhaps that constant cooling from the harsh sun is what also had so many smiles on display.

If it was all so good, then why would you want to sit it out? It’s true, but the U Flag once again claimed some victims. As for the racing, well it was intense as usual, and many did well. Some of those in turn were very happy, for they had not done so well yesterday, and thus after meeting with Prudence and Patience, were looking for some redemption.

Triad was one boat to kick on from yesterday, and how! Kirwan Robb, with Darren Jones, Hugo Allison and Sam Tiedermann took out Race Four, which was the first of the day. I asked Darren ‘Twirler’ Jones if he’d been putting the snake oil in the water bottles, “Maybe a little bit of beginners luck. It is awesome to get a race win in a Championship such as this, with the kinds of sailors who are here. The depth of quality sailor is unbelievable. It is even more exciting seeing as we only got into the boat a few days ago now.”

As for the win, Twirler said, “We have had a plan for each race, and we stuck to it. I think that has been a strong point of our sailing here. We have ticked it off, and it has played out well for us. We’re going OK, the boat’s OK, and even though we are not special in any particular area, and given how new the team is, I think we are putting together a nice set up. It has been a great event for us, when you think about it all.”

Winning Race Five in a commanding first to last post performance was the local outfit, Gen XY. As a result, they are also the overnight clubhouse leaders, with a slender one-point margin over last night’s victors, Havoc. Matt Chew is sailing with long-term crew Brian Donovan, Ben Vercoe, and for this regatta, Laser ace, Mitch Kennedy. A jovial Chew spoke ashore, “We’ll be going well if we can keep that 8th place as our drop. We had a bad start in that first race, and caught up really well to be fourth in the end, which is always encouraging.” As for their performance in the stronger breeze, Chew simply stated, “We don’t have any secrets, and I think we probably do better in the really light stuff. We were lit up in that last one, and makes for a really good day. Two more to come from here, and if we can deliver under pressure like we did today, then we will be really happy.”

Doing well overall too is, Animal House, from the Royal Freshwater Bay Yacht Club in Perth. Dirk Van Der Struyf is one elated skipper. Regrettably his normal crew could not make it, as they had expired all the leave and brownie points in the World Championship campaign, but Dirk has gelled well with his replacements from the Royal Geelong Yacht Club in Victoria. Tonight, together with Ben O’Brien and James Hannah they can be justly proud of being the Corinthian leader in 11th place overall, and five points clear of their nearest rival, Land Rat.

Van Der Struyf would say of it all, “Thank you. It is a nice feeling. Despite being a fill-in crew, which makes it challenging for the first few races, we are doing well. Our plan has been to keep it simple, and we certainly went for that today. I think another aspect is that we have kept it clean, and this really counts in an event like this.”

“We have not started well in any of the races to date, but the boat is going quickly, and this has allowed us to pick a few shifts, and wiggle our way out of trouble from time to time. We are happy because we are consistent (two 9s, a 12, and a 6 so far), and not had any blowouts, or rigs falling etc, etc. It is nice to be out here and sailing in beautiful conditions. We particularly liked the stronger conditions of this afternoon, and had the boat pushing along. Being in the top ten for that race was great, as the rarefied airs are kinder to you, and it is easier to get around the course. Being deeper than that is much, much harder, I can tell you!”

Showing that consistency may well be some sort of family member with Patience and Prudence today, was Lisa Rose. Martin Hill, Julian Plante, Mat Belcher and Sean O’Rourke collected a third and a seventh place today to see them be in third place overall for the evening. Clearly there is some enviable talent on board, but the smiling ninjas, and reigning World Champs, seem to be very much eying off the top position, and are only seven points astern of Gen XY.

Hill commented once back ashore, “A great day’s sailing out there; so wonderful we could have done two more races! We had speed in the lighter conditions, and just have to find some more in the stronger stuff.” In the end, all I can say is, look out for the blue PFDs!

Racing continues tomorrow from the Royal Queensland Yacht Squadron in Manly, with timing and number of races to be determined based on the weather. There are just two more races to be completed, and it is still very tight on the scoreboard. Please keep and eye on Facebook and the fleet website for updates.