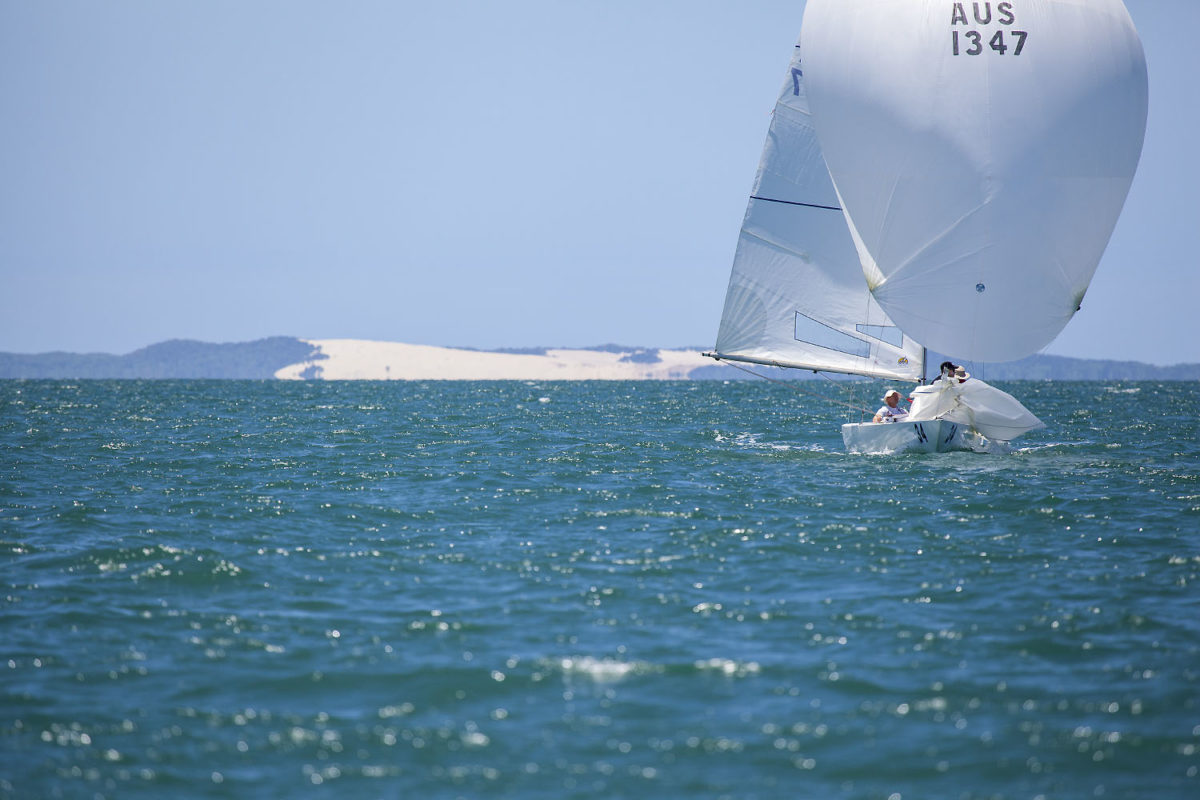 Rumours of no wind towards the tail of the 2019 Etchells Australian Championship would appear to have been great over-exaggerated. For sure it is not exactly blowing dogs off chains, but awesome seabreezes that kick in from 6 knots and go to double that, are utterly delightful. Some grass fires around the surrounds of Brisbane certainly remind you that it is the height of Summer, but on Moreton Bay, 27 Etchells and their crews are having a wow of a time.

Now some may be having more wow than others, but the smiles are there regardless, and with just the one race today, the emphasis certainly was on sweet. Not one sailor I spoke with afterwards had any other comment to add than just than one word! So evidently, it was worth the price of admission alone. Flat seas that were lucky to make much more than 1/3 of a metre, a tide that was on its way in for the duration of the race, and the consistent wind that settled in at 045 and just pinched right to 055 during the course of the race just made it all the better.

Talking of doing better, no one was able to match Gen XY (Matt Chew, Brian Donovan, Ben Vercoe and Mitch Kennedy) who made every post a winner today to be atop the table with a five point buffer over Havoc (Iain Murray, Colin Beashel, and Richie Allanson), and a further six away from third placed, Triad (Kirwan Robb, Darren Jones, Hugo Allison, and Sam Tidermann).

Matt Chew said ashore, “Thanks. It’s always a good feeling, and leading for the whole race is definitely a handy way to get the result.” Asked what you do to try and keep the head cool in preparation for tomorrow he added, “I don’t know exactly. We’ll go home, and try to have the same race again as today. Do the same things, check our wind readings, come of the start line well, and tack when we knock. That’s pretty much what we’re going to go for.”

Seems the Sailing 101 manual was very much on their minds. “It did feel like that today. Almost easy, as everything happened to plan, and we kept our noses clean.”

Leading the charge for the Corinthian trophy is Animal House. Dirk Van Der Struyf, Ben O’Brien, and James Hannah have a more than handy 12-point lead over second placed, Land Rat (John Warlow, Todd Anderson, and Will Thompson), and sit in the top ten overall tonight, as well. Talking with very affable Van Der Struyf again for the second day running, he commented, “Yes, and I hope I am talking with you again tomorrow! It is excellent to be in the top ten tonight. We had a pretty good day, and despite a poor leeward mark rounding, and a man overboard (he got back on safely), we did OK with our seventh place.”

“So it wasn’t all simple sailing, but it definitely was enjoyable. Glamour conditions, and Race Management was spot on, so with good boat speed, and going well, we are certainly happy tonight. One to go, and hopefully we keep it nice and simple.”

Having just won his first International Cadet national title as Skipper in Hobart only days ago (and is the youngest to ever do so), Hugo Allison is loving his time aboard Triad (with Kirwan Robb, Darren Jones and Sam Tiedermann), which is in third place tonight. The crew inform me that he is quite adept at nudging Jones when it is time to tack or gybe, but let’s hear form the young fellow himself, “Thanks. Yes, I won it twice before as crew, and one of those was with Sam Tiedermann as the Skipper.” So he is no stranger to the podium.

“I am having a really, really good time. It is my first time on the Etchells, and I’m really enjoying it. It is good, and I am loving being in the thick of it. It is my first time sailing with Twirler (Jones), who’s calling the shots. He’s doing really well. I sailed with Kirwan in the SB20 in Hobart, so we know each other already. It is also really cool to be out there with all these highly regarded sailors.

Seeing as the focus is on youth entering the Etchells Class, lets talk with the crew from Tumba Rumba, who are also having the very first ever foray into this premier One Design class. Simone Wood is skippering, with Adam Lavis on the main, Thomas Quigley is trimming, and Samantha Costin is pinch hitting for the crew with the kite hoist and spinnaker pole.

Wood commented, “It has been pretty interesting. The boat is owned by my parents, and as she’s a bit older we are certainly putting a lot of love back into her, and with no experience on Etchells at all. Every time we come off the water we have about an hour or two’s maintenance to perform. It has been tough, but we’re certainly getting there now.”

“The coolest thing has been to actually see how close the fleet is. Tom and Adam are both from skiff backgrounds, so this is wonderful to be up in the fleet, even if our boat is not in the best of form yet.”

Tom commented about the grandeur of the fleet by saying, “It is a bit nerve-wracking, seeing all these big names, like Iain Murray, Graeme Taylor, and Martin Hill, but I know we rounded one of the marks just behind Murray, so we know we can get the boat up to pace and competitive with everyone else. Now the challenge is to hold on. If we have time to practice and train ahead of the regattas, then we could do even better, and climb the ladder.”

Adam spoke about tactics, “We kind of have a bit of a chat about it, but Simone has the last say.” Wood certainly appreciates all the input, commenting, “All the data is important, and there is enough brains on board to figure it all out.” In unison they all felt that it had been more than rewarding and are very keen to pursue more Etchells events.

Racing continues tomorrow from the Royal Queensland Yacht Squadron in Manly, with just the one race needed to complete the series. Please keep and eye on Facebook, and the fleet website for updates.