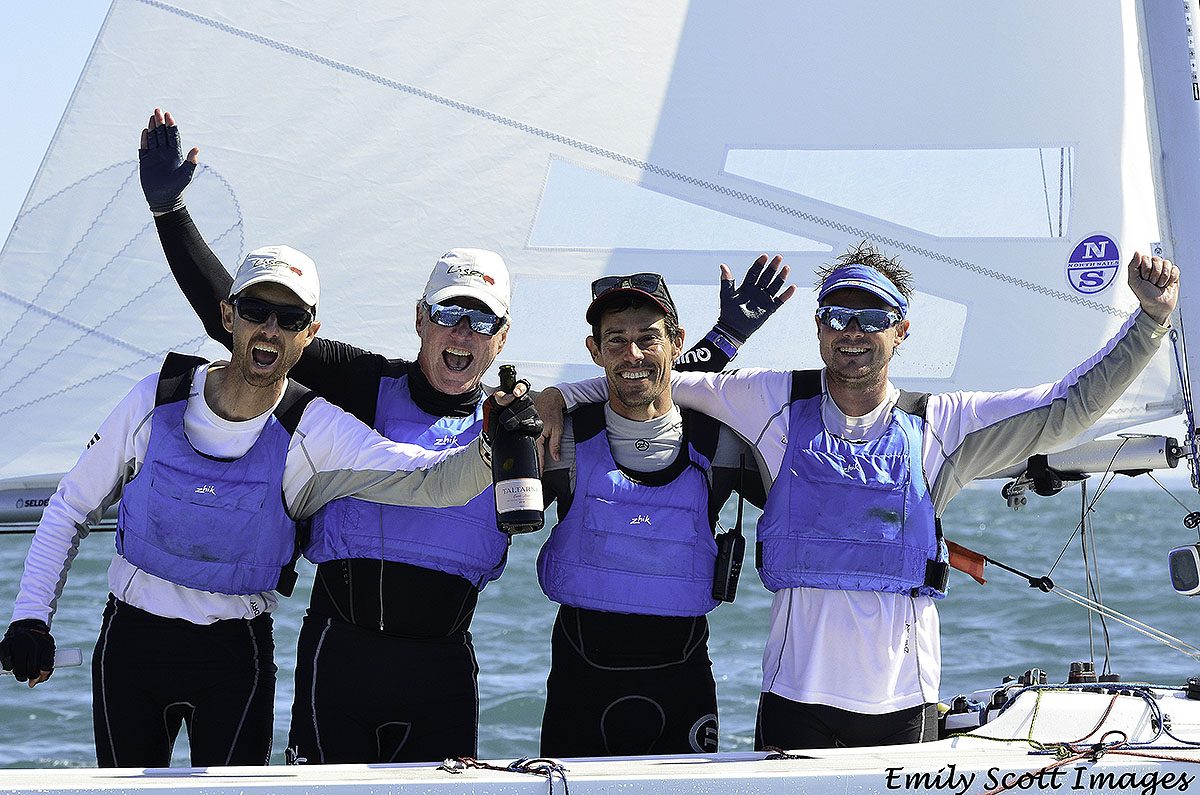 Seen a lot of water. Been to a lot of places. Today, Brisbane pretty much offered the classic mix of sun, and just enough wind for the last two races of the 2018 Etchells World Championship. I think it is fair to say that it was very much appreciated by all and sundry, whether they were competitors, or part of the large flotilla of spectators who took to Moreton Bay to witness the crowning of a new champion.

Now despite dire predictions, including no breeze at all just after lunch, it seemed Huey the God of Wind was just as motivated as the Race Committee to get a full series in. True, he may have wanted it to move around a bit, just to keep it interesting, but there can be no denying the intent.

So at around 1030hrs local, with the Sou’easter coming in from 140 degrees and blowing 7 knots at the bottom, and more like 9 at the top, Course 2 out to a range of 2nm, with the leeward gate set 0.7nm further uphill from the start, was all set up and ready to go. Pretty standard stuff by now…

Overnight leader, Lisa Rose (Martin Hill, Julian Plante, Sean O’Rourke, and Mat Belcher) would collect the win in Race Eight. Now whilst this may not have set the padlock on the gate, it well and truly closed it, and so staying in front of your opposition would see you become the 2018 Etchells World Champions in front of a lot of family and friends, as well as many a keen enthusiast. This all came to pass later in the afternoon in Race Nine.

In addition to the overall win, there were the Senior and Masters Divisions wins, as well. “Yes, it is very nice to hear those words, World Champion”, said Hill. “It is something we did not expect. We did know that we had a good team, however. I had known Mat for over 10 years, but it is a pretty tall order to arrive here with a fresh team, and against this sort of fleet, but we worked it together, and we felt the chemistry was right, so we improved as the series went on.”

“Even today when we started as leader, we knew that it was so easy to be first one day and 50th the next in a 94 boat fleet like this. Nervous was not the issue, but you do have to take each race as it comes. We started in the middle in that first race, and tacked on the shifts, which had us around the weather mark in third spot. We did well on the run to make it up to first place, which was important given we had a weakness in that area earlier. So then we hung onto that lead for the race win.”

“It was fantastic, but there was the matter of the next race, and whilst there was a buffer of like 17 points to the next competitor, but we were ultra aware that you could loose that much faster than you could gain it. Tactically, we just covered in Race Nine, rather than go for another win. Gen XY did get one place up on us, but again, the wonderful camaraderie of this class showed when John Bertrand and Scott Kaufmann realise we were in this tussle, and wave us through on Port, which was just marvellous.”

“The team was awesome, but Matt makes ordinary, extraordinary. He is fantastic. Having Will Ryan on Racer C in second place just goes to show the calibre of the Australian Sailing Team.”

Of course, Lisa Rose had an amazing support team of family and friends, including AST Coach, Michael Blackburn. “It is great. I could hear them cheering at each mark rounding and it is wonderful to share it with Lisa, the kids and grandchildren.”

Quayside as they craned the boat out, Matt Belcher indicated to me that he had a lot of fun with this latest member of his collection of World Championships. He also felt a special and unique place inside said group.

Race Nine ensued, and was set to an axis of 090 degrees as the breeze continued to move left. It was actually a bit stronger, sometimes making it feel like a real a 12 knots behind it. The range was set to 2nm, with the gate in the usual place. The difference this time was that as the racing was on schedule, the committee could opt for Course One with its upwind finish.

A leg shortening had been predicted, but it ended up being a change to 045, as the Nor’easter continued to hold sway. William Voermann, Lucas Down and Gary van Lunteren on Triad took out this race. “It was great and a good race, too”, said Voermann.

Apart from nailing the shift to the left during racing, Voermann indicated that, “A good clean start, and a textbook race with fast boat speed were essential. We played the shifts as well, as there were a couple in the first half of the first work to windward. So we stayed in phase, and kept mostly to the middle, and ultimately it opened up for us. The tide also dragged us up to the weather mark, as it began to ebb.”

“Downwind we worked hard, and on the second run, one of those boats that was ahead of us gybed away, which ended up costing them dearly. Almost everyone chose the Eastern gate at the leeward gate, and we were there by design, for we had a forecast that said it would go back to the left even more as the day wore on.”

In regards to collecting a bullet (first place) at a worlds and where to from there, Voermann simply said, “Who knows? We’ll just keep trucking along and learning.”

The largest division in the regatta is the Corinthians, who represent over half of the 94-boat fleet and are also 100% amateur. The popular Iron Lotus crew of Tom King, Ivan Wheen, David Edwards, and Greg O’Shea finished in 13th place overall, with a 49th place their worst result, once the Black Flag had been discarded.

At the time of writing there was a protest pending involving the leader in the Youth Division, Bait N Switch, which was crewed by Jake Lilley, Matt Wearn and Lewis Brake. Irrespective of the outcome, Jake Lilley’s comments about the sailing, the class, and the benefits of sailing Etchells still stand. “It’s been a long week of racing against a lot of top guys, and all the best in the world. It is a pretty new experience for us. It was our first time racing the Etchells, and all together too. It was also our first real Etchells regatta. So we have learned a lot, and it’s really valuable experience for us in our Olympic campaigns moving forward.”

Naturally, their results trended upwards as the week progressed. “It is important to be consistent, and we have not quite got the boat figured out upwind just yet. So we worked on starting well and then be in the right breeze lanes. There are a lot of typical things, but we have lots of lessons to draw upon now, many at the hands of past Olympians. So come the end of 2020 we are going to have many people to thank, hopefully.”

“It feels like Rio was yesterday, and the Olympic trials held four years ago were just last week. Time just disappears, and these regattas are just so crucial and critical little milestones, where we can get some good nuggets from the best in the world off the world, and then get schooled a couple of times out on the water. To race at home has just been terrific.”

The Grand Maters was won by John Bertrand AO, with Noel Drennan and Ben Lamb. The top female helm was Jeanne-Claude Strong who apart from collecting a race win, also finished in 20th place overall with her crew on 1435, Seve Jarvin, Marcus Burke and Jen Danks. She is an inspiration individual in so many ways, and tows her on boat to and from regattas. She is also an accomplished pilot, and brought her own plane home from the USA the long way via Europe and the sub-Continent. On top of all of that, she retains a bubbly personality, and a completely infectious enthusiasm.

Chairman of the organising Committee, David Irvine, was a justifiably proud man at the end of the day. “Who would have thought that around five years ago when we decided to go for it that we would be standing on the deck now, with just presentations to go, which will be my last official duty. In addition to the turnout, I think the conditions have been another highlight. We concentrated on giving people the best regatta we could on the ground, and the vibe in the boat park has been great. My back is sore from all the pats, and my right hand from all the shakes. That’s the best news, and I am very humble and very proud to be associated with this regatta.”

With more than a touch of his trademark humour on display, Irvine offered these gems for anyone contemplating something like this. “Firstly, don’t do it. Next. Jump in and plan the heck out of it. The findings will be handed on to Corpus Christi for 2019 and Perth 2020. You don’t get into it with 12 months to go. You start the moment you win the rights to hold it. It was the best regatta we could have put on.”

“The number of people involved has just been phenomenal. Today we had 27 people out there on start, mark, and safety. We had to make more shirts for the entire group, and it was in excess of 160. Their efforts equate to well over a thousand hours too. It is fantastic for the club, as well as the class. The Wilson brothers have been fantastic, and none of it would have been done without the committee that arranged it all.”

The Royal Queensland Yacht Squadron in the Brisbane suburb of Manly hosted the 94-boat strong armada for the 2018 Etchells World Championship.

Regatta Website at 2018etchellsworlds.org for full results and here for many things including live vision from the track, www.facebook.com/EtchellsBrisbane

previousEtchells Worlds Day 5 – When two is just one.